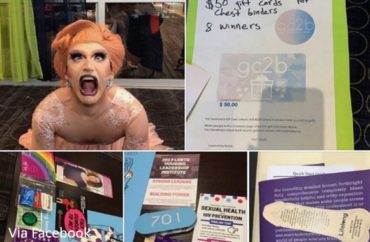 Moms also kicked out of library via police

Two concerned mothers who attended a recent “Teen Pride” celebration at a public library in Renton, Washington, told The College Fix that they have now been doxxed for their efforts to expose the event, which included a graphic dance by a drag queen and the distribution of other adult sex and gender materials.

Asking their names not to be published out of fear for their safety — as some of their birthdays and addresses have already made the rounds on social media — the two concerned moms said in interviews on Monday that they attended the June 22 event because they were upset at the programming and wanted to shine a light on it.

They said, although library officials promised it would be family friendly, it was anything but that.

The women and some of their allies attending the event in a somewhat undercover capacity were able to capture on film a large amount of the pride festivities at the Renton Public Library — including the graphic performance of a drag queen — before police were called to escort some of the moms out.

In the performance, the drag queen was seen removing a skirt at the start and then dancing in scantily clad clothing to the tune of the song “Like a Girl.” The drag queen sang in part, “If you feel like a girl, then you real like a girl. Do your thing, run the whole damn world.” The song ended with various expletives.

“I witnessed kids in that show and in the following panel that couldn’t have been more than ten,” one of the moms told The Fix.

In their main video, parents, teenagers, tweens, children and even kids in strollers can be seen at the library event. Footage showed the distribution of lube, dental dams, and flavored condoms. One pamphlet stated: “Abuse is not S/M [sadism and masochism].” Pictures also showed sex pamphlets in the shape of male genitalia.

Saleem Juma, an independent journalist, obtained a close-up of the freebies handed out at the event. One of them is in the shape of a penis and reads in part: “Reducing sexual risks is the easiest way to prevent your Moby-Dick from exhibiting 50 Shades of Grey … We want you to be the Lord of unzipping Flies, but don’t let an STI catch you by surprise!”

One of the moms told The Fix that she saw young people at the event under the age of 18 who were not accompanied by adults despite a library official saying that would not be allowed.

Meanwhile, another mom added that Planned Parenthood representatives there spoke about its “gender reformation services” that involve “giving testosterone and progesterone to young people” and they were hoping to offer them to children under 18 without parental consent.

The event also boasted gift cards for breast binders, one of the tools that many transgender men use to attempt to make their bodies into more of a traditionally masculine shape.

At around 5 p.m., event organizers began to forcibly remove parents who did not have teens with them, the moms said.

Lynn Meagher, an attendee at the event, tells PJ Media that, while she was being removed by the police, she said, “I am staying here and I am documenting this. If they’re not doing anything wrong, they should not be ashamed. Two officers [then] grabbed my arms and pulled me out of my chair and pushed me out of the library.”

Video of police escorting moms out was posted on Twitter.

After the concerned moms’ video of the event was posted, Emerald City Antifa began to dox the women, tweeting: “To reiterate today, we had two queerphobic adults filming kids going in and out of the bathrooms at Teen Pride event at Renton Public library… We’ll post link in thread, please help us identify these pervs.”

Elizabeth Nebenfuhr is the live streamer right? p sure i found her dob and address publicly available.

Commenters began to verify one of the woman’s date of birth and address.

“When we went out to the parking lot… We’re standing there talking and this man was photographing us. He started yelling at us and filming us and he said, ‘I’m putting your picture on Twitter. I’m filming your license plate. I’m going to make sure everybody knows who you are, you hateful bigot.’ And then we were surrounded and there are four men filming us and they are kind of circling us like wolves,” one of the moms told The Fix.

“We who have good intentions to protect our children from this indoctrination have become the enemy,” one of the moms told The Fix.