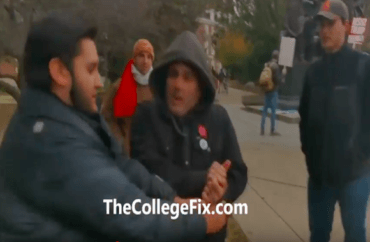 A graduate student at the University of Illinois was arrested recently after assaulting at least one student, an altercation that was caught on camera.

Tariq Khan, a PhD student at the university, was videotaped at a rally on campus shouting such things as “Fuck Donald Trump” and “Fuck you guys,” the last epithet apparently directed at several nearby members of Turning Point USA, a conservative activist organization.

In the video, Khan appears to tell the members of Turning Point USA that he is going to “go tear down one of your flyers right now.” At this point, a man identified as Joel Valdez, the executive board member and campus activism coordinator for Turning Point USA at the University of Illinois, yells at Khan: “No one’s scare of you, old man. Don’t you have kids to look after?”

At this point Khan rushes over to the students and begins verbally accosting them, asking them: “Are you threatening my kids?”

Turning Point USA provided The College Fix with video of the event:

At this point, Khan appears to notice the individual who is filming him, at which point Khan lunges at the cameraman, apparently taking a swing at him. “You want to threaten my kids, too?” he screams

Khan approaches both Valdez and the cameraman several times, ultimately telling Valdez: “You’d better check yourself, okay? Check yourself. I’ll fuck you up if you threaten…”

At this point Khan grabs Valdez’s phone from his hands and walks around with it while continuing to accuse the students of having threatened his children. Eventually Khan smashes Valdez’s phone before walking away.

Khan was later arrested for the altercation and issued a summons to appear in court “for criminal damage to property.”

The instructor is listed as being involved with several departments at the University of Illinois, including African American Studies, Gender and Women’s Studies, and Latina/Latino Studies.