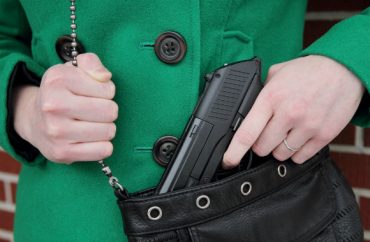 Texas state capitol is full of guns – and heated debate

Although protesters and even UT faculty have claimed that campus carry would effectively chill discourse on sensitive or divisive issues, the panel discussion at the “town hall” event hosted by CBS Austin suggested that lively discourse can still exist with guns on campus.

Asked by the moderator if students would feel uncomfortable with SB 11 being enforced on campus, Central Texas Gun Works owner Michael Cargill said that most Texans feel comfortable going into movie theatres and grocery stores, where concealed carry is prevalent.

Cargill replied that some of the “most heated debates take place at the Texas State Capitol. Concealed carry and even open carry is allowed there.”

UT Associate Vice President Bob Harkins, the lone neutral person on the panel, encouraged students to report any threats of violence to the police. He was more concerned about implementation of the law than how it might affect campus discourse.

MORE: No guns in class because we teach gay rights and abortion

Lopez received cheers from the audience for urging pro-carry members of the debate to “not politicize the death of Haruka Weiser,” a young student who was killed on campus after walking home late at night this spring.

Cargill and Lopez had different responses to how the law affected minorities.

The student activist said that as a woman of color, she felt “disenfranchised” by the passage of the law and its implementation on campus. Cargill, who is black, said minorities have the same rights as anyone else: “Any person of color can acquire a concealed handgun license.” ‘The police were not fast enough’

A Virginia Tech graduate who lived through the 2007 mass shooting on that campus said he perceived a cultural bias in favor of anti-carry partisans.

Nicholas Roland, a Ph.D. candidate in U.S. history at UT, said the “worst situation is to have no defense back” in the event of a mass shooting. “The police were not fast enough and 32 people died” in the Virginia Tech massacre because no one else was armed.

Most of the claims against campus carry in states where it has been legal for longer, including Colorado and Utah, have been unfounded, Roland said.

Prof. Bryan Jones, the Pickle Regents Chair in Congressional Studies at UT and a gun owner himself, made a practical argument against campus carry.

While guns have a place in society as a whole, their presence on campus might make it harder to recruit people from out-of-state to the university, as well as contribute to an increase in the suicide rate, Jones said.

DISCLAIMER: The author is Texas state director of Students for Concealed Carry.