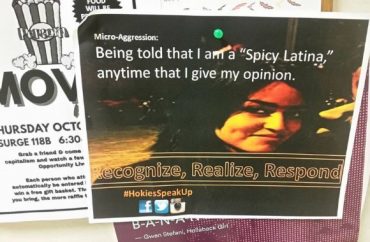 Be careful what you say at Virginia Tech. Chances are, it could be a microaggression.

Multiple groups at Virginia Tech have collaborated to collect “microaggression testimonials” from students, who came up with roughly 50 different expressions that offend them. The examples are currently displayed on the “Microaggressions: #hokiesspeakup” Facebook page.

While the campaign lasted through the Spring semester, several posters reminding student to watch what they say still pepper the campus today.

The grievances were collected at a series of weekly meetings hosted by the NAACP, the Muslim Student Association and Jewish Student Union. They can be categorized into several identity politics genres, including: disability, race, religion and sexual orientation. Among the posters still hanging, at least three remain up in McBryde, an academic hall, telling students not to say “All Jews are rich,” refer to other students as “spicy latinas” for giving opinions, and not to shout “run n*gger run” at black joggers while passing them on the street.

“It should have been a campaign to promote common decency, but beneath the surface, it plays into their own scornful agendas,” Virginia Tech senior Nicholas Korpics told The College Fix. “The minority groups on campus, especially within the leftist-queer community, have little to no intentions of reconciling with their ‘oppressors.’ They just want to isolate themselves and then say nasty things about people who oppress them.”

This is not the first time Virginia Tech has put up controversial posters. Earlier this year they came under fire after displaying messages that asked Christian students to check their “religious privilege.”

As for the 50 microaggressions collected at Virginia Tech, they include:

Disability
“Coworkers at another institution frequently tried to ‘diagnose’ people behind their back, and repeatedly described people with specific disabilities (that I share) as scary, dangerous, awkward, creepy, weird, ect.”
“Don’t call yourself that,” where that refers to me calling myself disabled.
“She’s so bipolar.” Disabilities are not insults.
“You have so much to be thankful for, you have no reason to be depressed.”
“You just need a positive mental attitude!” being told to people with mental illness or other disabilities.
A disabled person being told “You’re so inspirational” for doing an everyday task.
A non-disabled classmate viewing the R-word as just another swear word and including it in a poem.
Going to other campus social justice or diversity events, and them not being accessible [for disabled people].
Having to take a longer, less obvious route to get into buildings on campus. Religion
“All Jews are rich.” I’m working to pay myself through college.
“Jew are just white people”… explain these communities who have existed for centuries.
There are many holidays to be observant of, and I may have to miss class. Please respect my religion.
When someone finds out that I’m Jewish and then asks if I was born that way.

LGBTQ
“I don’t understand why you can’t just be happy with your body.”
“Since you’re transitioning, does that make you [insert sexuality here]?”
“What’s your real name/gender?”—One’s identity and/or gender are what they say it is.
“Why can’t boys just dress like boys and girls just dress like girls?”
“Why can’t you just be gay?”—Gender identity and sexuality are not the same.
But gender is socially constructed, you don’t need to physically transition”—accept, don’t invalidate trans people’s experiences and wants for their body.
People correcting others for not using certain terms to describe me (e.g. “No, that’s a dudette”)—let trans people describe their own identities.

Race and Ethnicity
“When you underestimate my mental capacity based on my proficiency speaking English.”
Arriving at a house party and hearing, “Party’s over, too many n*ggers here, time to leave.”
Being asked if “there were pinatas” at my friend’s party.
Being asked to present the black perspective in a predominantly white class.
Being called an “angry black woman” when speaking in a stern voice or standing up for yourself.
Being in a room full of fellow academics and being told that you speak “very intelligently.”
Being the only person questioned at a party after the DJ’s IPod goes missing.
Being told that I am “so well spoken…for a Latino.”
Being told that I am a “Spicy Latina,” anytime that I give my opinion.
Jogging down the street and hearing “Run N*gger Run,” shouted from cars passing by.
Professors making condescending remarks about your undergrad because it was an HBCU.
Treating my hair as your own private petting zoo.
Virginia Tech students asking me what I plan to do with my degree “back home.”
When fellow Hokies tell me, “I thought all of YOU PEOPLE were good at basketball.”
When I tell someone about my origins and they reply with “Wait, you’re all not Mexican!”
When meeting someone for the first time, and the first thing they ask is if “English is my second language.”
When my white professors say “n*gger” thoughtlessly in class.
When people tell you you’re only at Virginia Tech because of affirmative action.
When school official state that, “people like you should stay home and not waste taxpayers dollars…despite scoring in the 90th percentile in nationwide exams.”
When white people claim to be “blacker than you” for knowing the words to a rap song.
When you tell people where you’re from and they automatically assume you’re from the “bad part” of that area.
When you think it’s humorous to ask me, “how do you say taco in Spanish.”