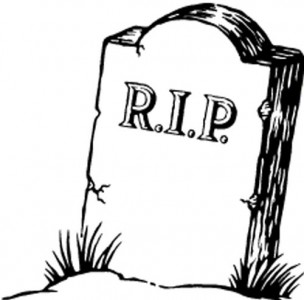 A black professor, railing against what he calls “the current dire state of white supremacy in the nation,” recently implied that anyone witnessing white people in mortal danger should “let them fucking die.”

The college at which the professor works subsequently closed for the day “due to threats received to campus.”

Shortly after the GOP shooting incident, according to The Hartford Courant, Trinity College associate professor of sociology Johnny Eric Williams posted to his Facebook page that it is “past time for the racially oppressed to do what people who believe themselves to be ‘white’ will not do, put end to the vectors of their destructive mythology of whiteness and their white supremacy system. #LetThemFuckingDie.”

“I’m fed the fuck up,” he added, “with self identified ‘white’s’ [sic] daily violence directed at immigrants, Muslim [sic], and sexual [sic] and racially oppressed people. The time is now to confront these inhuman assholes and end this now.”

Following these posts, Trinity College stated via its Twitter feed that it had received “threats” and thus “all campus buildings are card ID access only.” A short while later Trinity’s Twitter feed announced that “the College is closed until further notice.”

In a follow-up post on his Facebook account, Williams denied that he had “called for the death of all self-identified whites.” Rather, he claimed, he “merely attached the hashtag to my post derived from a blog article written by Son of Baldwin entitled ‘Let Them All Fucking Die.'” 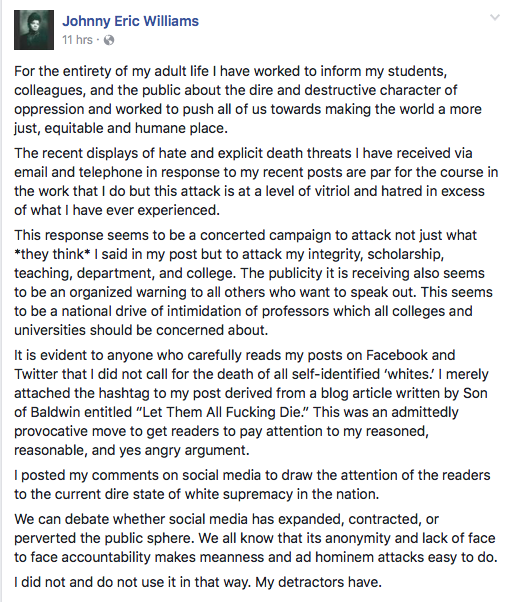 That article, posted on the blogging website Medium, is a long, rambling essay that rails against “white/cisgender/heterosexuals,” imploring the reader to “let them fucking die.”

Appearing to endorse the idea of letting innocent people die, Williams wrote, “was an admittedly provocative move to get readers to pay attention to my reasoned, reasonable, and yes angry argument.”

Regarding the threats directed at the school, Trinity College’s Emergency Management Team noted in a press release: “This remains an open and active investigation.”