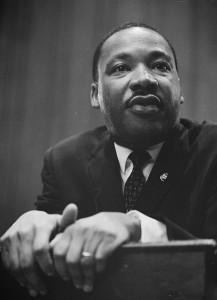 Was Martin Luther King, Jr a conservative? The answer, I think, yes and no. As the face of the 1960’s civil rights movement King argued to advance the causes of organized labor and advocated civil disobedience as a means of resisting racial injustice. Those aren’t things we typically associate with conservatives.

On the other hand, King had no interest in the identity politics that make up so much of the racial politics of liberals today. He argued, most powerfully, for people to be judged by “the content of their character,” not the color of their skin. This argument meshes well with the modern conservatives’ emphasis on individualism and personal responsibility.

At CNN.com, John Blake posts some thoughts on the issue:

As the nation celebrates King’s national holiday Monday, a new battle has erupted over his legacy. Some conservatives are saying it’s time for them to reclaim the legacy of King, whose message of self-help, patriotism and a colorblind America, they say, was “fundamentally conservative.”

But those who marched with King and studied his work say that notion is absurd. The political class that once opposed King, they argue, is now trying to distort his message.

King’s most famous words are the crux of the disagreement.

“He was against all policies based on race,” says Peter Schramm, a conservative historian. “The basis of his attack on segregation was ‘judge us by the content of our character, not by the color of our skin.’ That’s a profound moral argument.”

I think the answer lies partly in understanding that conservatism itself has changed since the 1960’s. The states-rights conservatism of that day has gone extinct in the mainstream Republican and Democratic parties, insofar as the abolishing of segregation via federal power is now universally celebrated. No major figure in either party today would argue to uphold segregation on the basis of state’s rights.

Yet the left has certainly abandoned King’s vision of a color-blind society, where all would be judged (and indeed all would judge themselves) on the basis of character rather than melanin. And it’s hard to imagine King endorsing the modern left-wing policy of perpetual racial quotas as permanent solution to inequality. And it’s impossible to imagine him doing the kind of blatant race-mongering and profiteering that passes for civil rights leadership among those several men who have sought to fill King’s place as the spiritual and political leader of black America. I don’t need to name names.

I don’t think King would fit perfectly today into either mainstream party when it comes to race issues. The fact is, mainstream liberals have moved away from King’s most enduring principle–that we should assess the individual without regard to skin color. Meanwhile, mainstream conservatives have moved toward him in several important areas–realizing once and for all that states’ rights are secondary to natural rights under the U.S. Constitution.

Was Martin Luther King a conservative?

A better one would be this: Are today’s conservatives more like King?

The answer is, yes.