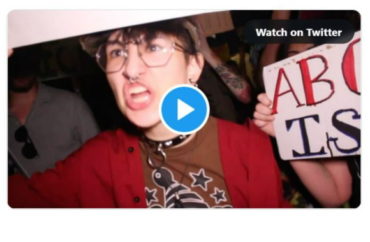 A recent pro-choice rally in Arizona turned aggressive after some “Students for Kari” volunteers showed up to counter-protest.

Videos of the May 3 protest, which consisted mostly of college-aged participants, show pro-choice demonstrators curse at, spit on and berate volunteers with the “Students for Kari” group, which is working to help elect Republican Kari Lake to the state’s top office.

The expected Roe v. Wade reversal by the Supreme Court, which came to light last week due to a leak, had inspired the pro-choice rally, held at the Arizona Capitol.

“We believe that everybody has the right to life,” the group explained on Twitter about why its members crashed the pro-choice rally. “[W]e went to the capitol to have conversations about how Kari Lake believes in defending the rights of the unborn.”

The pro-life counter-protest was not organized by the campaign but was a grassroots decision by some volunteers to take part, the campaign told The College Fix.

Videos posted by the group show the volunteers surrounded by a mob of protesters, and due to the aggressive nature of the situation, “slowly the pro-life protestors backed off and left the crowd,” said Anthony DeWitt, 20, one of Lake’s volunteers.

We believe that everybody has the right to life. Yesterday we went to the capitol to have conversations about how Kari Lake believes in defending the rights of the unborn. This is how the tolerant left reacted:#prolife #prochoice #roevwade #life #karizona @KariLake pic.twitter.com/ETuOgDgLEF

“There had originally been about 30 pro-life protestors and we had quickly got surrounded by hundreds of pro-abortion activists and extremely agressive and sometimes violent people,” DeWitt told The College Fix.

DeWitt stayed, however. He chanted “Hey hey, ho ho, Roe v. Wade has got to go” on a bullhorn.

“Never thought I’d be told to kill myself and that my life was meaningless simply for standing in defense of the most vulnerable human beings on earth. But I refused to be bullied/harassed and stood my ground,” DeWitt tweeted May 4.

Never thought I’d be told to kill myself and that my life was meaningless simply for standing in defense of the most vulnerable human beings on earth. But I refused to be bullied/harassed and stood my ground! 1/0 #DefendLife #DontTreadOnMe #LakeforLife @KariLake @StudentsForKari pic.twitter.com/aErkQIM6Lc

The Arizona Mirror reported that a group of far-right extremists also crashed the rally and one man was arrested on “suspicion of assault and disorderly conduct after state troopers witnessed him punch another person at the rally.”

DeWitt said he does not know the man nor others who showed up at the rally with him to counter-protest.

He said the only people present who were official members of the Lake campaign were the people he was with, “Students for Kari.”

DeWitt said that, as he was surrounded by the crowd, he was also spit on and had liquid poured on him.

“I, however, refused to move, even by repeated beckonings from both sides and I stayed in the middle of that crowd for about 20 to 30 minutes being yelled at, screamed at, spit on, assaulted, and berated the entire time,” he told The Fix.

My message to the Lost Souls that literally spit in the face of my amazing interns:

Never forget that your mother chose LIFE. We’re praying for you. pic.twitter.com/BH4mT5rE57

Lake said in a statement to The College Fix that the “far left is totally out of control.”

“Everyone has a right to protest and make their voice heard, but the hatred and violence of the far left is totally out of control. In 2020 they learned that if they just behave badly enough – cause enough property damage, assault and even kill enough people – that Democrat politicians … will bow to their insanity every single time. The lawless violence, hatred, and bigotry of the left must be stopped, and sanity restored to our country,” Lake said.