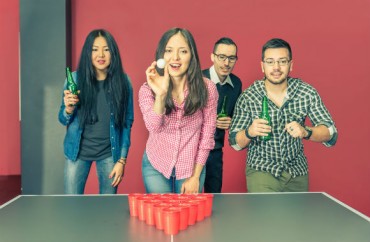 In a recent Washington Post column, contributor Kate Cohen complains that young women attending fraternity parties often feel like they have to bring a friend with them to feel safe.

“Remind me again — why do we still tolerate these places?” Cohen asks.

The answer to Cohen’s question lies in a pesky document known as the United States Constitution, which allows individual citizens the right to associate with whomever they want. In the case of campus life, this means young men and women forming organizations of like-minded individuals with whom to hang out, study, and drink beer.

This has been the case for almost as long as colleges and universities have matriculated students through their doors. Fraternities, sororities, secret societies and the like are as ingrained in college culture as sports or studying.

But recent sensibilities have begun to change as the behavior of yore has become less acceptable. A 2020 New York Times article summed up the “War on Frats,” detailing how some students are pushing their classmates to drop out of Greek life, noting “Abolish Greek Life” efforts have cropped up at places like the University of Richmond, Duke, Emory, American University, Northwestern and the University of North Carolina.

But what Cohen’s column and the Times article are both missing is any sort of suggestion about what colleges can do about fraternities. Because the answer is – virtually nothing.

Sure, universities now think they’re responsible for student behavior both on and off campus, but once a student leaves the school grounds, there is little the college can do to monitor their behavior. The school is in charge of educating students, not micromanaging their private lives.

And those private lives include deciding with whom they want to associate. Could a school tell a student they’re going to the wrong church, or they couldn’t belong to a theater group, or prevent them from attending poker nights with their friends? Of course not – these are all behaviors protected by the First Amendment’s guarantee of freedom of association.

And thus it is the case with fraternities and sororities – as long as they’re off-campus, schools have absolutely no right to tell their students with whom they can live or hang out.

Sure, a school could ban certain fraternities and sororities from taking part in school activities, or cease to formally recognize them. They could bar Greek students from forming intramural teams, or holding positions in student government. But in my experience, much of a fraternity’s formal contact with a school comes in the form of philanthropy – renting a room to hold a fundraiser, holding educational events, and the like.

To be sure, bad things do happen at fraternity parties – Cohen herself rattles off a list of a handful of alleged sexual assaults, none of which has yet been proven.

Of course, nobody should ever excuse sexual misconduct. But blaming fraternities for this behavior is missing the mark. Does anyone believe that if fraternities went away and students partied in darker corners of campus, that somehow things would be safer? Fraternities have monitors and national chapters to whom they answer – would pushing partying down into more private homes and apartments with no accountability solve this problem?

And that’s not to mention all of the social benefits students accrue from being in fraternities and sororities. The stereotype of Greek life is privileged white men slamming beer cans on their heads, but students of color often take refuge in fraternities and sororities to form their own communities on campus. Are colleges desperate for more diverse student bodies going to tell prospective minority students that these time-honored traditions are off limits?

The numbers show that even at schools where efforts are underway to kill off the Greek system, few students are dropping out of fraternities voluntarily. Students are now customers, and will happily take their money to the schools that fulfill their idea of what social life on a college campus means. Fraternities may not be perfect, but schools should fix them before urging students to kill them off completely.