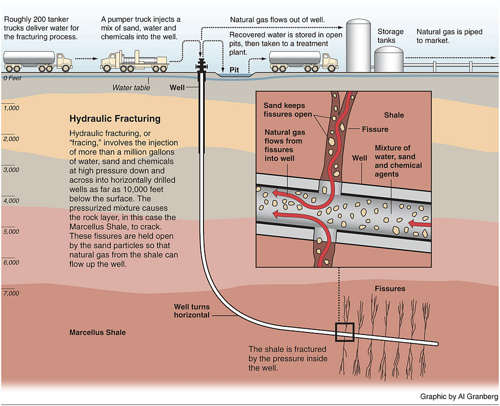 The chant of “drill, baby, drill,” is sounding from an interesting corner. The University of Tennessee has proposed a plan to allow hydraulic fracturing to extract natural gas on state-owned land—here’s the twist—to give the university an opportunity to study the environmental impacts of “fracking.” The research would be funded using the revenues from the extracted natural gas.

It’s a “fundamental conflict of interest,” says Gwen Parker, a staff attorney for the Southern Environmental Law Center, which is trying to block the move. But the unprecedented plan has powerful supporters (including Tennessee governor Bill Haslam) and the aura of “so-crazy-it-just-might-work.”

The land in question is an 8,000-acre patch of mature woodlands in the Cumberland Plateau that the university’s agriculture department has overseen since 1947. It currently operates the forest as an outdoor laboratory. Environmental groups are loath to see one of the state’s few mature Cumberland Mountains forests disturbed, but the university believes there is little to worry about. Because the drilling would take place on state-owned land, the university would maintain strict oversight of the project.

And contentions aside, it’s a timely project. Hydraulic fracturing uses high-pressure blasts of sand and water to create fractures in shale through which natural gas can escape. But if that technology, which is making accessible enough natural gas to power the United States for years to come (not to mention generating revenues in the billions of dollars), has revolutionized an industry, it has also become a prime target of environmental groups, who claim that the process could release harmful methane into the air and contaminate groundwater.

Determining whether those fears are warranted is the University of Tennessee’s goal.

“There are questions surrounding natural gas extraction and we have the facilities, and we have the faculty, so we have the obligation to investigate in an unbiased, scientific way to provide those answers,” Dr. William F. Brown, dean of research and director of the university’s Agricultural Experiment Station, tells the Associated Press.

But the proposal is quickly becoming another battleground in the debate about academic “independence,” which, particularly when it comes to fracking research, has sparked conflict on other campuses.

The University of Texas (Austin) Energy Institute came under fire for a 2012 study on the environmental consequences of fracking that had as its principal investigator a paid board member of an energy firm that conducts hydraulic fracturing. The State University of New York at Buffalo shut down its Shale Resources and Society Institute last year after outside groups questioned a study on fracking co-authored by the institute’s co-director, who previously did public relations work for an upstate New York energy firm.

But Brown rejects the notion that there is an ethical problem in the University of Tennessee plan. “We need to get past this notion that if the university works with an industry, that somehow we are compromised or tainted.”

Moreover, such partnerships are becoming more attractive as government research grants shrink and universities struggle to find the money to conduct the type of large-scale research required by fracking. Still, the faculty selected to conduct research will be screened for energy industry connections.

Tennessee’s State Building Commission unanimously approved the university’s proposal on March 15, opening the process to bids from outside drilling companies. The commission will have to approve the final contract.