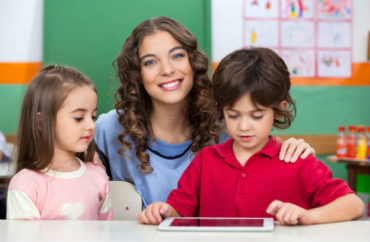 AUSTIN, Texas – The white professor who quit her full-time position to tour the country, leading seminars on “white fragility,” asked for whites in the room to come forward.

About 15 people walked to the stage and each one read a quote from the projection screen that addressed their “internalized superiority,” “racial privilege” and other deficiencies as whites.

When they finished reading, the professor told the audience to “not clap” for the white people as they returned to their seats. She announced there would be no question-and-answer session.

Then Robin DiAngelo, a part-time lecturer at the University of Washington who coined the term “white fragility” and wrote a forthcoming book on it, summarily dismissed the three-hour exercise in getting whites to feel bad about themselves.

DiAngelo was invited to the University of Texas by the Public Affairs Alliance for Communities of Color, a student group, to lead Saturday’s racially charged event titled “White Fragility: Understanding and Working Against White Privilege.”

She’s given seminars at this year’s Diversity and Inclusion Summit at Brown University, and at schools ranging from tiny Franklin & Marshall College to 15,000-student Western Washington University.

In a 2011 journal article that introduced white fragility to the world, DiAngelo defines it as “a state in which even a minimum amount of racial stress becomes intolerable, triggering a range of defensive moves.”

DiAngelo told participants that even as someone who leads seminars on the subject, it’s hard for her to talk about white fragility because it makes all whites uncomfortable and “very irrational.”

She warned participants from the start that the whites in the room would likely get defensive because they tend to hold “emotionally charged” opinions on racism.

Though they have “a perspective,” whites have to recognize that their knowledge is limited unless they devote “years [of] sustained study, struggle, and focus” to racism, according to DiAngelo, who says she co-designed the “Race and Social Justice Initiative Anti-Racism training” for Seattle.

The workshop was a veritable parade of diversity buzzwords. DiAngelo said her goal is “interrupting whiteness” because it is often “unmarked,” and people must “center it” in order to “expose” and remove it.

Among questions posed during two- to three-person discussion groups that DiAngelo occasionally convened: “How does whiteness manifest” in society, “What is welcoming and affirming for white people here” and “How do white people respond when the topic of racism comes up?”

During one small-group discussion, DiAngelo asked participants to define “Prejudice,” “Discrimination,” and “Institutionalized Oppression” so as to highlight how whites may misinterpret these words.

She showed a slide that revealed how men are overrepresented in powerful American roles such as CEO, member of Congress, mayor, governor and the presidency.

DiAngelo titled it “The Example of Women’s Suffrage,” apparently because she asked the crowd if they believe men could take the right to vote away from women. She didn’t answer her own question, but rather smiled and moved on.

Another slide said 99 percent of the directors of the 100 top grossing films of all time worldwide were men. 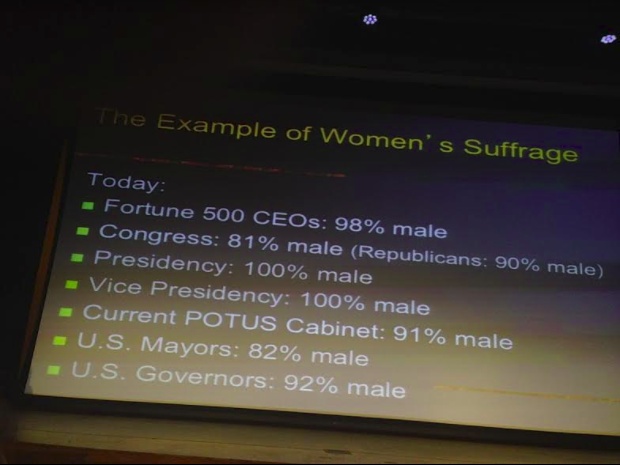 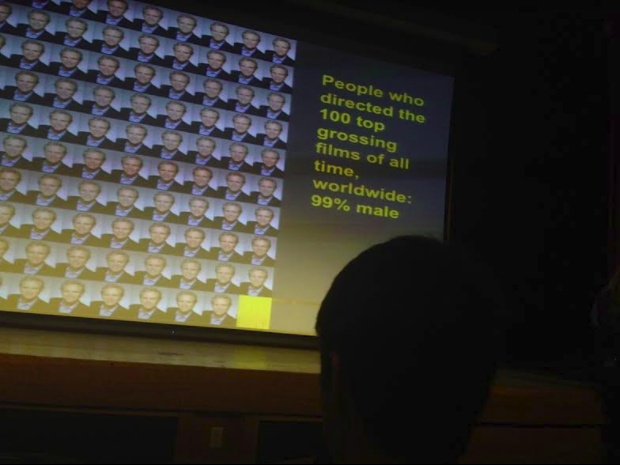 DiAngelo used a photo of male politicians discussing women’s healthcare to show how men are keeping women under their thumb. She highlighted the amount of “power” and “sexism” in the room.

Pretending to be a fly on the wall, DiAngelo said one of those politicians will suggest they should include women in the discussion. Eventually his colleagues agree, in DiAngelo’s scenario, in order to make them look more inclusive.

But these males’ strategy for drawing women into the discussion is to “make the brochures pink.” Eventually a woman will join their group, and at some point she will “help them see their sexism.”

However, DiAngelo did distinguish among women by their race, class and “intersectionality,” saying “there is no universal woman’s experience.”

Too many whites are teachers

“Racial Socialization Questions,” the name of another group discussion, featured questions that will make participants reflect on their race and background.

(If UT faculty or administrators were in the seminar, they didn’t announce it beyond their small groups. One person in a group with The College Fix identified as a UT staff member who was there to learn.)

Some questions touched on how messages were transmitted to people when they were kids, such as how racially diverse was their neighborhood and “What messages did you get about race from the geography of race?”

DiAngelo also asked groups to answer: “When is the first time you had a teacher of the same race[s] as you? How often did that happen? When did you first have a teacher of a different race than you?”

These are important discussion topics because they help people talk about “institutionalized oppression,” such as DiAngelo’s assertion that whites are too great a percentage of teachers in America.

Racism is embedded in the United States, she continued: “We are in a society that are not equal,” and “institutionalized oppression” can be found in religion, family and the media.

But many white people use a tactic called “white defensiveness” when they’re talking about race, which makes it hard to talk about racism, according to DiAngelo. She didn’t define the term, but one example given in a blog post is the phrase “All lives matter.”

As with other terms in her presentation, DiAngelo didn’t define what she meant by “white space” and “black & brown space,” other than that society teaches the first is “good,” “sheltered” and “innocent,” and the second is “sketchy,” “dirty,” and “to be avoided.”

The following slide, “Above The Surface: Dominant White Racial Narratives,” listed quotes that whites say to supposedly make themselves feel like they’re not racist: “I was taught to treat everyone the same,” “Race doesn’t have any meaning to me” and “I see people as individuals.” 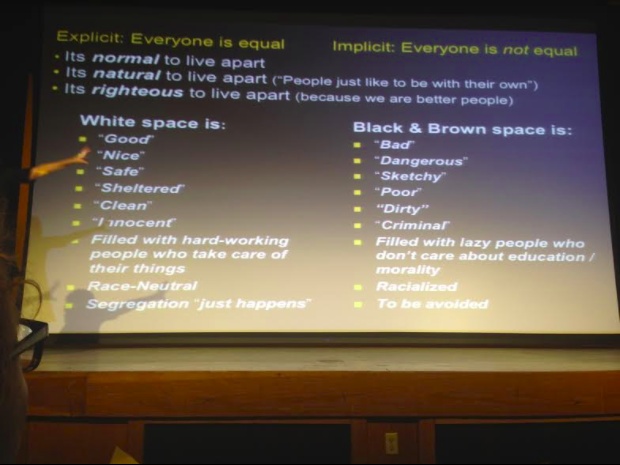 When a man plays ‘Devil’s advocate,’ it’s a ‘power move’

The next participation activity focused on white wrongdoing from the perspectives of whites and “people of color.”

Whites were asked “what narratives” they have used to “deny the impact of race on my life and present myself as ‘getting at it’?” Nonwhites were asked how whites deny that impact. 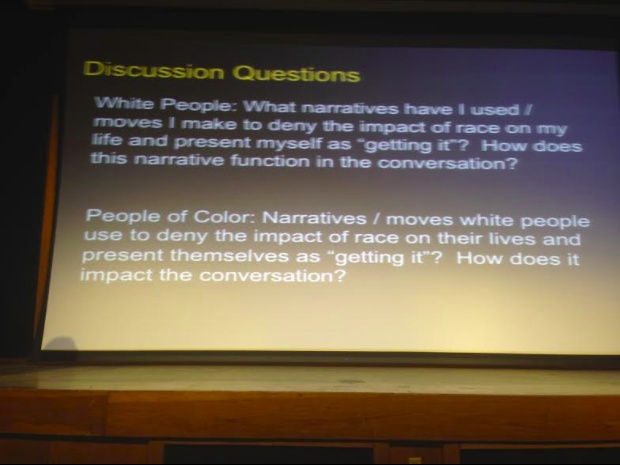 Though she didn’t hold a Q&A, DiAngelo told participants they could individually talk to her afterwards.

Asked by The Fix if groups other than whites suffer from fragility, she cited “dominant groups” such as “males” and “able-bodied” people that make other groups suffer.

She declined to answer a question about why men are the overwhelming majority of the prison population if they are a dominant group.

The Fix had asked to play “devil’s advocate,” to which DiAngelo responded that such phrasing is a “power move” coming from a male.