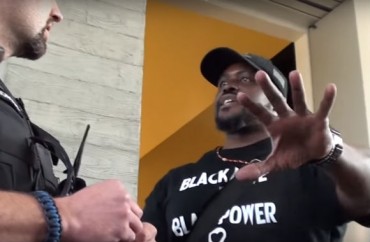 When administrators at Portland Community College envisioned “Whiteness History Month,” they probably didn’t plan on incorporating members of the Black Panthers in their programming.

Yet that’s exactly what happened at the college’s Cascade campus Tuesday when a woman attending one of the program’s lectures was ejected for defending Republican Party presidential frontrunner Donald Trump against claims of racism.

The incident is not the only one that has marred the monthlong event at PCC, which is only in its second week.

A sign posted outside the room’s door set the racial tone for the lecture. “Please respect that this workshop is for Black and African identified folks exploring their blackness in a healthy and community based manor [sic].”

During the lecture, the speaker’s message apparently turned from informative to political, with the speaker insinuating that Trump was a racist.

A woman listening to the lecture who was not a student decided to question his politically charged anti-Trump direction, as she told an independent journalist who showed up to film the event shortly after.

Shortly after she was made to leave, the woman told the videographer she asked the speaker why Trump had support from black voters if it was true he was a racist. That was when, she said, she was asked to leave.

“A woman sitting beside me decided to question me with the intent of having me thrown out of the meeting,” claiming that she was “upsetting” people and “creating a bad vibe,” the ejected woman says on the video.

In a phone interview with The College Fix, the videographer said he had attended and filmed other Whiteness History Month events that past week but arrived at this event after the confrontation with the woman. He asked not to be identified as well.

The video shows that when the videographer returns with the woman to the lecture, the police are called.

When PCC police officer Erik Hargrove informed attendees that the woman was permitted to be at the public event and was not being disruptive, others resorted to emotional appeals.

“Right now this event is not about being negative,” an unidentified man told Hargrove.

Even with a police presence and a copy of the state statutes authorizing his presence in the room in his hand, the independent journalist opted to film through the glass from outside the room.

“I was a little intimidated and a little scared if I were to actually go into that room,” he told The Fix on Sunday. “You can see in a couple shots [in his video] that there are actual militant Black Panthers in that room.

“If you don’t want the public showing up to your events,” the videographer said, “then you shouldn’t do it on a public college.”