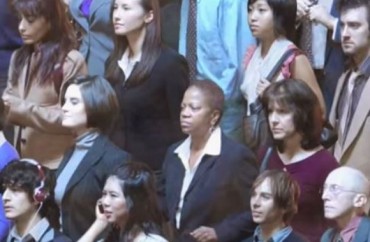 University of Wisconsin-Stevens Point officials have advised faculty that the term “America is a melting pot” is a racial microaggression.

The common phrase was among a list of examples of so-called racial microaggressions used “as a discussion item for some new faculty and staff training over the past few years,” a campus official told The College Fix in an email.

Other phrases on the list included: “You are a credit to your race,” “where are you from,” “there is only one race, the human race,” “I believe the most qualified person should get the job” and “everyone can succeed in this society if they work hard enough.”

In the case of Wisconsin, the document is broken down into three columns: theme, microaggression and message. It lists “everyone can succeed in this society, if they work hard enough” and “I believe the most qualified person should get the job” racial microaggressions because those phrases supposedly send the message that “people of color are given extra unfair benefits because of their race. People of color are lazy and/or incompetent and need to work harder.”

Another common phrase listed is “America is a melting pot” because, according to the document, it represents a message that minorities must “assimilate/acculturate to the dominant culture.”

The list has been widely circulated this week by several news outlets, which criticized the university for chilling free speech and free expression on campus.

However, a campus official told The College Fix in an email that any suggestions that UW-Stevens Point had banned professors from saying the phrases are false.

“Unfortunately, recent reporting has created the false impression that UW-Stevens Point has banned certain words and phrases from being spoken by professors. This simply is not the case,” said Greg Summers, Provost and Vice Chancellor for Academic Affairs, in an email to The College Fix. “The list of possible ‘microaggressions’ that you have likely seen has been used as a discussion item for some new faculty and staff training over the past few years, but in no way has the university adopted anything on the list as policy.”

Nevertheless, some professors have criticized similar lists of so-called microaggressions, saying even if the phrases are not literally banned, their inclusion in faculty trainings are enough to suggest they should not be used.

For example, Eugene Volokh – a professor at the UCLA School of Law – points out in a Los Angeles Times op-ed:

Say you are a UC employee without tenure: a young professor, an adjunct lecturer, a teaching assistant. Your employer has repeatedly stressed the need to maintain a welcoming campus climate and to promote diversity.

Indeed, your employer makes “contributions to diversity and equal opportunity” — such as “research … that highlights inequalities” — a factor in employment decisions, according to its academic personnel manual.

Now your employer tells you that expressing certain views is tantamount to racial aggression, micro or otherwise.

Is your reaction, “No problem, I can write and say whatever I think is right about affirmative action or meritocracy — after all, people were only invited, not required, to attend the seminars where my opinions were condemned as a form of racism”?

Or would your reaction be, “If I want to keep my job, I had better avoid the views that my employer says are potentially ‘hostile, derogatory, or negative'”?

And writing for Bloomberg, Harvard University professor Cass Sunstein argues that “it is true, of course, that some people might find such statements deceptive or hurtful, but in well-functioning democracies and universities, feelings will sometimes be hurt. It does students no service to treat them like children – or to threaten to punish people for stating perfectly legitimate political convictions.”

And an LA Times editorial stated that “worse yet, the material posted on the UC website discourages faculty members from expressing legitimate political opinions. Surely a professor ought to be able to say that America is a melting pot, or that affirmative action is a bad policy because it is inherently racist. Since when are universities afraid of clashing or provocative beliefs?”

In a statement released to Fox News, the University of California system echoed the sentiments that the University of Wisconsin-Stevens Point official proffered, that the phrases aren’t banned and simply used for training purposes.

However, the University of California also stood by their standards, saying: “Given the diverse backgrounds of our students, faculty and staff, UC offered these seminars to make people aware of how their words or actions may be interpreted when used in certain contexts.”