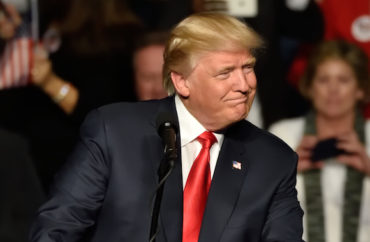 A political science professor at the University of California, Berkeley described Donald Trump’s Helsinki press conference with Russian President Vladimir Putin earlier this month as “textbook treason,” but that professor has so far refused to explain just how Trump committed treason

Martin Fish, a professor of political science who focuses on post-Soviet politics, democratization and regime change, said of the press conference: “This is textbook treason. This is what treason looks like. The fact that it’s been so brazenly committed, and on an ongoing basis over a two-year period, is blinding.” Fish’s comments were publicized by Berkeley’s news department.

“I think after the Helsinki summit people who’ve been turning away from this, above all liberals whose sense of fair play, respect for procedures, and assumptions that no one can be that bad, now have to see the light of day. We now have to realize and call this what it is. This is treason,” Fish added.

Fish offered no clarifying remarks on how President Trump’s behavior constituted “treason.” Treason is the only crime explicitly defined in the Constitution, which defines it as “levying War against [the United States], or in adhering to their Enemies, giving them Aid and Comfort.

The College Fix reached out to Fish multiple to ask what specifically about Trump’s actions constituted treason under the Constitutional definition. Fish did not reply.

One professor who spoke to The College Fix explicitly rebuked Fish’s claim that Trump is guilty of treason. Adam Carrington, professor of political science and the American presidency at Hillsdale College in Hillsdale, Michigan, told The Fix via email: “No, President Trump’s conduct at the conference was not treasonous.

“Considering the Constitution’s definition of treason, the President did not act in any way consistent with it. The President did not levy war against the United States. He did not ‘adhere to’ an American enemy. He did not give an enemy aid and comfort,” Carrington said. “The differences about Russian policy between President Trump and his critics are serious. But they are ones of policy, differences over what is in America’s best interests.”

“Treason is the only crime defined in the Constitution. The Framers did so because treason is among the worse [sic] of crimes, one whose punishment was usually the death penalty. They knew that historically partisans have equated treason with any kind of contrary action or opinion. People have used the accusation to silence opposition,” Carrington added.

Fish is not the only voice to claim that Trump committed treason during the Helsinki Conference. John Brennan, who served as CIA Director under Barack Obama, tweeted “Donald Trump’s press conference performance in Helsinki rises to & exceeds the threshold of ‘high crimes & misdemeanors.’ It was nothing short of treasonous.”

The late night host Stephen Colbert also said that Trump’s actions were treasonous, though he too did not substantiate that accusation.