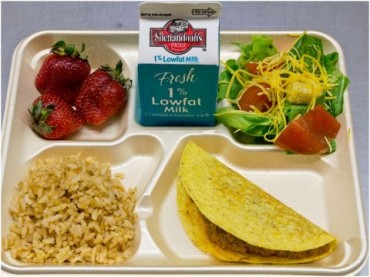 Seven Wyoming schools have decided to go it alone when it comes to serving their kids lunch, saying “goodbye” to the federal Healthy Hunger Free Kids Act.

After Sheridan County One scrapped the program, the number of students who chose to buy school lunch went up twenty percent.

Jeremy Smith, the district’s business manager, said, “Universally, it was, ‘We are starving. We are hungry. This isn’t enough food for us.’ But we couldn’t blame them, because I looked at that school lunch and said, ‘I wouldn’t eat it either.’”

Two years ago, the federal government put strict new guidelines in place for school lunches to get kids eating healthier. Since then, about one million students have left the program nationwide. Many students are simply brown-bagging it — dissatisfied with what their cafeteria serves under the new standards. Others attend a small but growing number of schools who are ditching the federal program—and its dollars—altogether.

This is a big change from last year, when federal guidelines under the Healthy Hunger Free Kids Act had students eating a lot more grains and vegetables — and fewer calories. Back then, student satisfaction was at an all-time low. Howarth’s school is among a small but growing number of schools around the country who are ditching the federal program — and its dollars — altogether. There are 7 such schools in Wyoming.

Fortunately for Sheridan, it is a fairly affluent district with less than twenty percent of its secondary student body qualifying for free/reduced lunch. As such, it can afford to dump the federal program. (Cost: $50,000.)

But most schools in the country can’t afford to do that.

“A one-size-fits-all program doesn’t work everywhere,” says [Sheridan One food service director Dennis] Decker. “And I also think that food is a little too personal to make a law. You can tell someone they can’t speed, but I don’t you can tell everybody what they have to eat every day.”

But Tamra Jackson, the Nutrition Supervisor for the Wyoming Department of Education, is stupefied: “We’re trying to lay a foundation for kids to make healthy choices when they get older. It amazes me that people are mad that we’re serving them healthy food.”

h/t to The Daily Signal.