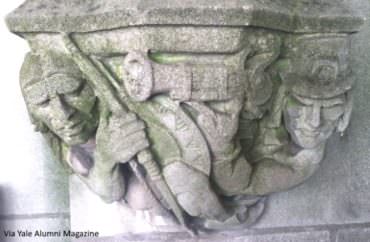 Yale University has announced it will take down an 88-year-old stone carving from one of its buildings that depicts an armed Native American and Puritan side by side after campus officials determined the artwork depicts “colonial violence.”

In the stonework, the Native American carries a bow and the Puritan a gun, flanking each other. Campus officials “consulted faculty and other scholarly experts, who concluded that the image depicts a scene of warfare and colonial violence toward local Native American inhabitants,” Yale reported through its alumni magazine. 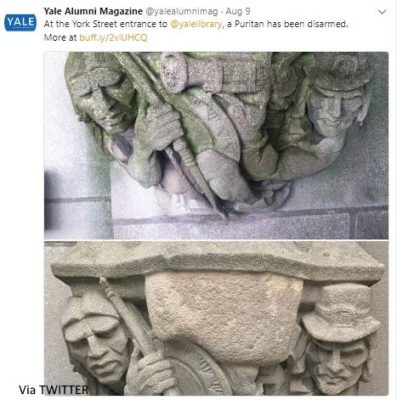 The carving had been recently censored, with campus officials covering up the Puritan’s gun while leaving the bow revealed.

But after news of that artwork censorship spread, President Peter Salovey stepped in, saying “we cannot make alterations to works of art on our campus. Such alteration represents an erasure of history, which is entirely inappropriate at a university.”

With that, campus officials have announced plans to take down the stonework entirely and move it to a yet-to-be-disclosed location where it can be viewed and accompanied by some sort of plaque that gives it “historical context.”

The College Fix reached out to nearly a dozen art professors at Yale to get their take on the matter. All have ignored the requests for comment thus far.

Yale’s media relations office did not respond to numerous requests from The College Fix seeking to determine when the carving would be taken down and where it would be put on display. A call to Salovey’s office was simply referred back to the media affairs division.

Yale spokesman Tom Conroy was willing to tell The Fix that in 2016 the carving had been given a more prominent place, as the “little-used doorway” it hung near was remodeled to become a new main entrance to Sterling Library.

Yale’s Committee on Art in Public Spaces “determined that leaving the depiction in place would have the unintended effect of giving it a place of honor that it does not deserve,” the alumni magazine reports.

And Conroy said via email that “consistent with principles subsequently adopted by the university and now in place, Yale’s policy is not to make alterations to works of art on its campus. The university is making plans to recognize the original carving.”

Based on recent events, it appears Yale campus leaders do not consider moving artwork to a less visible location a violation of its policy “not to make alterations to works of art on its campus.”

Salovey, in his public comments on the issue, said that “we are obligated to allow students and others to view such images, even when they are offensive, and to study and learn from them. … We do so in a setting that clearly communicates that the content of the image is not being honored or even taken lightly but, rather, is deserving of thoughtful consideration and reflection.”

As previously reported by The Fix, “it is unclear if any students or faculty had concerns about the musket carving. Archives of the student newspaper, The Yale Daily News, list no news record of any such complaints.”