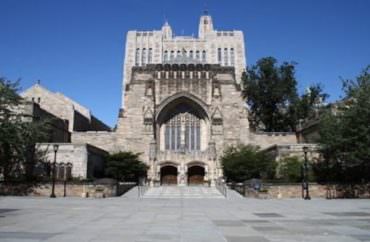 Program will charge or reward buildings based on their carbon usage

Yale University is pioneering a first-of-its-kind carbon charge program that will tax its buildings based on their carbon emissions.

The program aims to combat climate change by monitoring the amount of electricity, chilled water, natural gas and steam consumption from its buildings and charge departments a fee if they use more than an established baseline amount, according to campus officials, who in announcing the program blamed climate change for “heat waves, floods, wildfires, crop decline, infectious diseases, violence and conflict.”

The program, which begins this month after “three years of study, discussion, and experimentation,” aims to impart “a financially impactful fee on carbon emissions,” according to campus leaders in a video.

“This approach keeps the net amount that each unit is charged relatively small, while also, on the margin, giving everyone an incentive of nearly the full social cost of carbon,” said Casey Pickett, the director of the Carbon Charge initiative.

Buildings will be charged by billing “the top-level administrative unit a building reports to,” according to the program’s implementation page. Beginning this year, “each participating administrative unit has two new budget lines: A charge line for the unit’s carbon charges, and a return line to allow a percentage of the university-wide carbon charge total to be returned to that unit.”

Tuition, room and board at the private Ivy League institution costs nearly $70,000 a year.

“The Yale carbon charge is revenue neutral at the university level,” Pickett added, “which means there is no surplus and no deficit, by design. The university returns every cent of the carbon charge to the administrative units that receive the charge, but it returns the funds in a different way than it charges, which creates an incentive for each unit to reduce emissions.”

Asked for clarification about the “different way” that funds are returned, Pickett explained it by way of the “return formula,” which he laid out as: “Total Yale emissions in current period X percent of Yale emissions in the baseline period X Social cost of carbon = Return.”

According to Yale, the federal government recommends the ideal carbon charge as $40 per metric ton of carbon dioxide.

University President Peter Salovey wrote in a statement, “Yale’s carbon charge program is an important example of our commitment to curbing climate change and reducing greenhouse gas emissions, and it shows that research, scholarship, and teaching are at the heart of Yale’s environmental efforts.”

The program also vows that Yale’s campus will be carbon neutral by 2050. Being carbon neutral means reducing your carbon emissions to zero a combination of energy use reductions and the purchase of carbon credits.