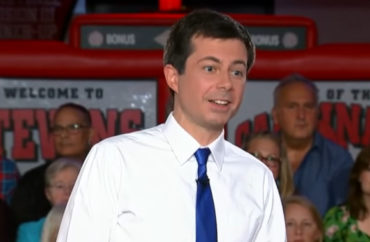 Democratic presidential candidate Pete Buttigieg and his husband Chasten offer a “vision of heterosexuality without straight people,” according to commentary by a Yale University assistant professor in Women’s, Gender and Sexuality Studies responding to the politician’s recent image on the cover of TIME magazine.

On the Los Angeles Review of Books website, Professor Greta LaFleur argues the photo is a symbol of heteronormativity:

“At first glance, one sees the anonymity of Norman Rockwell’s mid-century America: the house-unparticular porch, the timelessness of the couple form. Take another look and the pillars supporting the unseen roof of the porch start to resemble the Ionic columns of the White House, the background becoming a gesture or a promise of possibility. You begin to see the image in the aggregate, and the couple, girded by a backdrop literally overwhelmed by the household, becomes the timelessness of the entire image. This photo also tells a profound story about whiteness, above and beyond the fact that almost everything in this photo is, itself, white. It’s such an all-consuming aesthetic, here, that it practically resists interpretation; like the generically familiar (to me, a white person) porch, the cover photo claims that there’s nothing to see, because we already know what it is. We have seen this image, we know this couple, “we” should be comfortable.”

After an extensive passage in which LaFleur argues “whiteness can be and regularly is weaponized by white people,” LaFleur goes on to suggest that Pete and Chasten may not actually be gay:

If certain forms of structural power such as whiteness have become detachable from white people, perhaps this is true of other forms of structural power as well. This is not to make a “like race” argument (although this is of course such a problematic staple of so much theorizing in sexuality studies) so much as it is to make a “like power” argument; and the argument I am making, of course, is that this photo is about a lot of things, but one of its defining features is its heterosexuality. It’s offering us the promise that our first gay first family might actually be a straight one.
…
Queer theorists and queer communities have coined terms like homonormativity to describe this effect, but this recent Time cover left me wondering: is this homonormativity? Or just heterosexuality? If straight people can be queer — as so many of them seem so impatient to explain to me — can’t gay people also be straight?

LaFleur’s criticisms are a branch of a new brand of intersectionality that attempts to rank group grievances based on sexual identity, race and class. Under these terms, simply being a gay white male is less of a burden than, say, being an LGBT African-American female, given the “intersection” of multiple minority statuses.

This has left Buttigieg, the white Harvard-educated mayor of South Bend, Ind., open to criticism from academics and others who don’t view him as sufficiently gay.

Prediction regarding Peter Buttigieg: this candidacy will expose the major faultiness between white gay men and the rest of the LGBTQ community.

Among LGBTQ folk, I have only heard white gay men excited for him. Meanwhile, not only have I not heard any support from him from a single LB or T person (or any LGBTQ person of color), many LGBTQ people I know are openly hostile to what he is offering…

This has riled some who see Buttigieg’s ascendance as major progress in the quest for LGBT rights. Republican political consultant Tim Miller, writing in The Bulwark, noted that just a few years ago, the Buttigieg marriage would have been illegal. As a sign of progress, even President Donald Trump last week said Buttigieg’s same-sex marriage was no big deal.

Perhaps it is Trump’s acceptance that riles academics like LaFleur, who writes Buttigieg’s palatable brand of gayness isn’t sufficiently confrontational. In her blog post she discusses the “portability” of heterosexuality, citing a 1987 Leo Bersani essay called “Is the Rectum a Grave?” The essay argues a small city in Florida burned down the home of a straight family of hemophiliacs who can contracted HIV because the citizens thought the children represented “the infinitely more seductive and intolerable image of a grown man, legs high in the air, unable to refuse the suicidal ecstasy of being a woman.”

LaFleur finishes the post by complaining that Buttigieg, a white male, is getting more press coverage than women like Kamala Harris, Elizabeth Warren, and Stacy Abrams (who has yet to join the race.)