A “yoga studies” professor at Loyola Marymount University is requiring students to include their gender pronouns on  coursework — or else their grade will take a hit.

Christopher Miller, who teaches courses such as “Hinduism, Jainism, and Yoga” and “Foundations of Yoga Studies” and was part of the “Surfing Yogis” at the 2013 India Surf Festival, sent out an email to his students back in September advising them of the new mandate.

“I added a new syllabus to Brightspace and the one major change we all need to take note of is that all are required to include their pronouns next to their name in their blog posts,” Miller wrote, according to Fox News.com. “I will count this toward your grade when I check for your name each time I grade the blogs.” 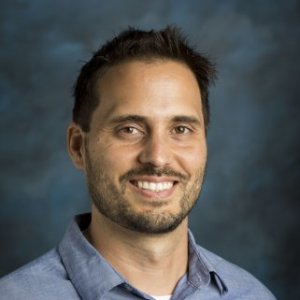 Miller (left) included a link to a page by MyPronouns.org titled “What Are Personal Pronouns and Why Do They Matter?” The article claims that “making assumptions” about a person’s gender “sends a potentially harmful message” — that “people have to look a certain way to demonstrate the gender that they are or are not.”

“Worse,” the piece continues, “actively choosing to ignore the pronouns someone has stated that they go by could imply the oppressive notion that intersex, transgender, nonbinary, and gender nonconforming people do not or should not exist.”

The College Fix asked Miller what sort of penalty students would suffer if they do not comply with his pronoun edict. He did not respond. 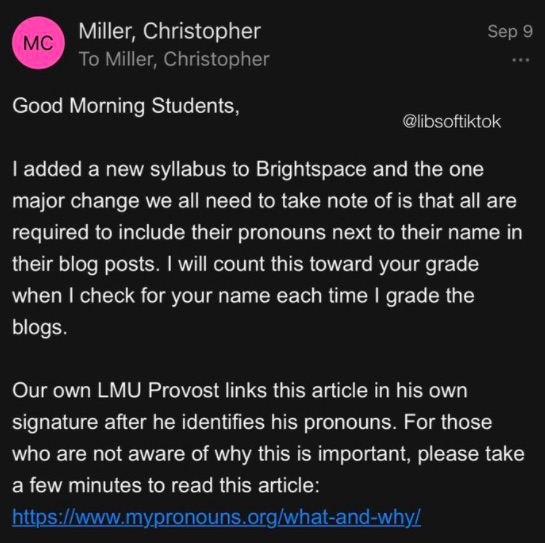 A Los Angeles Times article from May describes Jainism as a belief in “nonviolence,” nonpossessiveness” and “acceptance of multiple viewpoints.” It has been spreading through colleges in the wake of demands to “decolonize” curricula.

Miller, who originally studied accounting, told the paper that Jainism “blew his mind.” In order to take up the philosophy of “nonviolence in his own life,” Miller said he became a vegan and even “stopped killing ants and spiders that invaded his home.” He also now grows his own vegetables “without pesticides,” drives an electric vehicle, has no furniture in his home and sleeps on a mattress on the floor.