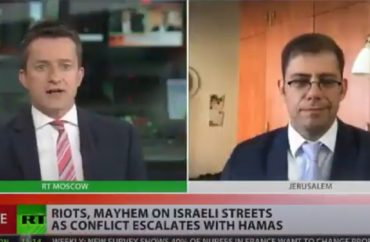 YouTube has twice removed and then reinstated a video in less than 48 hours of a George Mason law professor defending Israel’s recent military actions against Hamas.

“And my explanation of how Israel complies with int’l law in the Gaza conflict is BACK UP on @YouTube, share and watch before it is taken down a third time,” Eugene Kontorovich wrote early this morning.

His video, an interview he did over the weekend with Russia Today, had been removed by YouTube for allegedly breaking its “violent criminal organizations policy” according to screenshots posted by Kontorovich.

FURTHER UPDATE: video taken down again from my & @KoheletForum‘s @YouTube channels. As itn’l pressure grows on Israel to stop fighting Hamas, someone wants to silence any explanation of why Israel’s actions are legal under int’l humanitarian law. https://t.co/THMypR8TIJ

“As [international] pressure grows on Israel to stop fighting Hamas,” the George Mason professor wrote on Monday night, “someone wants to silence any explanation of why Israel’s actions are legal under int’l humanitarian law.”

The video has been removed the first time during the day Monday, then reinstated, then evidently removed again, the first time for “violating community guidelines.”

“International law requires all combatants, Israel and Hamas, to adhere to the principle of distinction, “ the professor said. This term means that the military and civilian assets must be separated so that collateral damage can be minimized.

Hamas has used humans as shields to protect its military assets.

He further explained that Israel has minimized civilian deaths and while they generally warn people before bombing empty buildings, they are not under obligation to always do it.

The conflict “is going to go on forever” in “one way or another” Kontorovich said, before giving more of the history of the Israeli-Palestinian conflict.

“There will be more rounds of fighting” because of Hamas’ funding from European and other “foreign money,” the professor said.

YouTube also previously removed and reinstated the video of Gad Saad, a Canadian professor, who made a video mocking criticism of Georgia’s election integrity legislation.