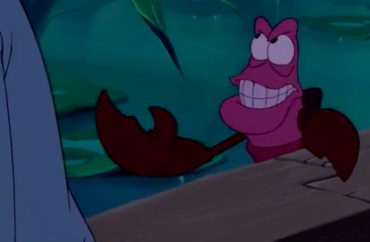 Song was originally sung by a crab about a mermaid

An a cappella group at Princeton University has temporarily stopped singing a hit Disney song after at least one student complained that it can “catalyze violent tendencies toward, and assault against, women.”

The group, the Princeton Tigertones, have stopped singing the song “Kiss the Girl” from the movie The Little Mermaid until “the members can perform it in a way that’s comfortable for the entire audience,” Inside Higher Ed reports.

That song, which in the film is sung largely by the anthropomorphic crab Sebastian, features lyrics urging a suitor to “go on and kiss the girl, kiss the girl.” At their performances of the song, Higher Ed reports, the Tigertones would pick a young woman and a young man from the audience, sing to both of them, and then urge them to smooch, “and the couple will comply, sometimes on with a peck on the cheek, sometimes briefly on the lips.”

Yet in a recent op-ed in The Daily Princetonian, sophomore Noa Wollstein argued that the Tigertones “elevate [the song] to an offensive and violating ritual.”

“The song launches a heteronormative attack on women’s right to oppose the romantic and sexual liberties taken by men, further inundating the listener with themes of toxic masculinity,” Wollstein writes, claiming:  “The fervor with which the all-male Tones press the man to kiss the female subject eerily amplifies the song’s assertions of toxic masculinity.”

Now, Higher Ed reports, the Tigertones have agreed to cease performing the song:

[Group President Wesley] Brown wrote that performances have made previous participants “uncomfortable,” and offended observers, and so the group has tried to make sure that audience participation is voluntary — he did not elaborate what steps the members had taken.

This has not succeeded, Brown wrote, and so the group is eliminating the song. He apologized to past participants in the skit who felt uncomfortable. He did not respond to a request for additional comment.

“Our group is always striving to impart joy and positivity through our music, and we take very seriously any indication that we fall short of this goal,” Brown wrote. “For that reason, we want to make sure that all audience members feel encouraged to reach out to the group and initiate a dialogue if they ever feel that any aspect of our show is upsetting or offensive. Our repertoire, traditions, and group as a whole are constantly evolving, and thus we value this opportunity to ensure a more comfortable performance environment moving forward.”

In her op-ed, Wollstein also noted that, by selecting a male and female participant from the audience, the a cappella singers “reinforce the heteronormativity reflected in the words of the song.”