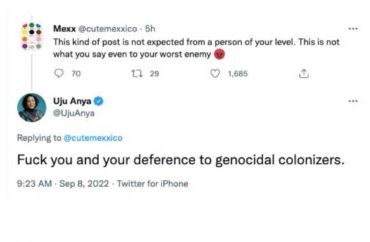 ‘There is no plan to sanction or fire me, and my job is not in jeopardy,’ Uju Anja wrote on Twitter

“By publicly condemning a Black woman for her views and choosing to distance themselves from an academic whom they recruited and hired to engage in discourse, Carnegie Mellon administrators made several things worse and one thing clear: freedom of speech is never ‘free’ for people of color in America,” Branden Elmore and Dwayne Wright wrote.

Elmore is a postdoctoral associate at the Center for Diversity and Inclusion in Higher Education at the University of Maryland, according to Inside Higher Ed. Wright is an assistant professor of higher education administration and director of diversity, equity and inclusion initiatives in the Graduate School of Education and Human Development at George Washington University.

“Instead of supporting its faculty member, the institution’s response was to try and protect its institutional brand and identity. In doing so, perhaps unwittingly, this institution participated in the high-tech lynching of a Black woman,” Elmore and Wright stated.

“I heard the chief monarch of a thieving raping genocidal empire is finally dying…That wretched woman and her bloodthirsty throne have fucked generations of my ancestors on both sides of the family,” Anya wrote on Twitter, hours before Queen Elizabeth II’s passing. “She supervised a government that sponsored the genocide my parents and siblings survived. May she die in agony.” 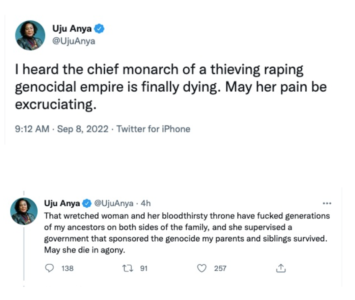 When another Twitter user told Anya that her comments weren’t “expected from a person of [her] level,” Anya responded, “Fuck you and your deference to genocidal colonizers,” The College Fix reported. To another who wrote “Ewww you stink,” Anya replied “You mean like your pussy?” 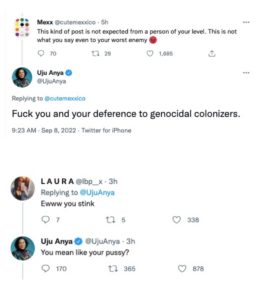 Twitter deleted the initial tweet because it violates Twitter’s rules against wishing harm on other users,” according to MSNBC.

However, before Twitter deleted it, Anya’s message went viral when Jeff Bezos retweeted it.

“This is someone supposedly working to make the world better? I don’t think so. Wow,” Bezos wrote.

This is someone supposedly working to make the world better? I don’t think so. Wow. https://t.co/2zoi6CdFMq

Carnegie Mellon did not penalize Anja, she wrote on Twitter.

“From what I’m told, there is no plan to sanction or fire me, and my job is not in jeopardy,” she stated September 12.

From what I've been told, there is no plan to sanction or fire me, and my job is not in jeopardy. My university leadership showed very clearly they did not approve of my speech; however, they stand in firm support of my freedom of expression on my own personal social media.

However, the university did distance itself from Anja’s views, tweeting that “free expression is core to the mission of higher education” but “the views she shared absolutely do not represent the values of the institution, nor the standards of discourse we seek to foster.”

“We do not condone the offensive and objectionable messages posted by Uju Anya today on her personal social media account,” the school continued.

Elmore and Wright condemned this response as “anti-Blackness.”

“Carnegie Mellon administrators decided to make it seem as if the university was the victim of her ‘expression,’” the authors continued. “The institution inscribed the identity of the villain onto Anya, one of its professors, rather than the trolls, racists and billionaire that deemed themselves the judge, jury and executioner over her speech.”