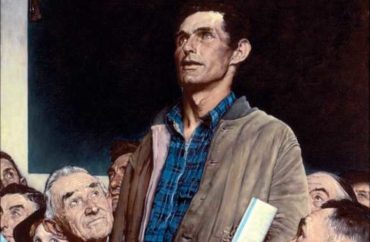 Frank Resartus analyzes ordinary life under the regime of DEI

Frank Resartus, “a teacher at a law school in the Northeast,” contributed a parable of sorts to a recent symposium at The New Criterion: “Affirmative action and the law.”

While other essays in the symposium analyzed possible Supreme Court rulings on affirmative action and their effects on the culture, or the consequences of racial prejudices, Resartus took a different approach.

Instead, Resartus told the fictional story of an average, middle-aged, upper-middle-class professional. “Call him Bob,” he said. Bob isn’t anyone in particular, but he stands for millions of Americans in our day and age. Bob has a fine education, a good corporate job, a happy marriage and a prosperous living. “At the same time,” Resartus wrote, “Bob knows that his good fortune would evaporate with just one impolitic move.” Or perhaps one unfortunate tweet.

It began with suggestions. Bob was encouraged to add preferred pronouns to his email and hang the latest LGBTQ flag in his office. Bob thought it all a bit silly, Resartus wrote, but “rather than risk being accused of transphobia,” he complied.

Such small but naggingly coercive mandates originated from a new set of staff hired by Bob’s employer: full-time “diversity, equity, and inclusion” officers, according to Resartus.

Several times a year, Bob attends required professional diversity training. “The buzzwords, Bob notices, keep mutating,” Resartus wrote. First Bob learned the lessons of implicit bias; next the consultants reveal the law of “compounded discrimination,” which declare that success builds on success, which means in practice that Bob could destroy a colleague’s career by accidentally overlooking or neglecting her contribution. In the wake of the George Floyd murder and subsequent riots, Bob’s DEI consultants declare that the firm must become a “consciously anti-racist institution.”

So diversity becomes “an obsession,” Resartus wrote, for the firm, which implicates Bob, our hapless hero.

“The firm’s goal, say the executives, is to increase the percentage of the diverse at every level of management,” Resartus wrote. “Nobody says it out loud, but the logical inverse is that the percentage of whites must constantly decrease.” Bob could be of Polish or Norwegian or Italian or Australian descent; regardless, he feels lucky to have his job despite the color of his skin.

As the regime of diversity, equity and inclusion advances through Bob’s firm, new “best practices” emerge, according to Resartus. The company celebrates each event on “the liturgical calendar of diversity”: Black History Month, Pride Month, and Global Diversity Awareness Month, to name a few.

“Bob is not merely nudged towards enthusiastic embrace of ‘diversity’ at every turn,” Resartus wrote. Unfortunately, “to show any lack of enthusiasm for diversity is to forsake any hope of promotion, not to mention to risk being fired. According to its diversity and workplace-harassment policies and training, a speaker’s intent is irrelevant,” Resartus wrote. “Conversations at work are limited to pleasantries.”

At his job, Bob can more or less get by. But his children are having some trouble in school. Instead of biology, they learn “sexuality” and “gender,” Resartus told us. Official textbooks tell Bob’s kids that male and female have nothing to do with anything material. Bob’s kids are mixed up about their identities, not least because they’re encouraged to make them up on their own, with social media as their guide. Some of their friends are “on the path to surgery,” Resartus wrote.

Shakespeare and other dead white males are thrown out of the curriculum in the name of “decolonizing it,” Resartus wrote, and “both teachers’ employments and students’ enrollment contracts now include anti-racist pledges. Parents must participate once a semester in school-wide anti-racist programs.”

Back at his job, Bob sees the encroaching tide of new graduates and recent hires who “almost all have some signal of support for the work of diversity, equity, and inclusion.” This is the vanguard, and Bob knows he cannot fight it.

“This ideology is ubiquitous,” Resartus wrote. “Oddly, it keeps attracting obscure labels, such as ‘Critical Race Theory,’ ‘cultural Marxism,’ or ‘the successor ideology.’ But the idea is very straightforward…any difference in outcome between races, ethnicities, the two sexes, or any other politically salient dimension is conclusive evidence of injustice and discrimination.”

Nearly every large employer conforms, and nearly every school recites the same creed.

In short, Resartus wrote: “The ubiquity of woke ideology and the pervasive fear of challenging it suggest that it is more than a system of ideas. It is also a system of power.”

An essay written decades ago illuminates aspects of the dominant ideology

In October 1978, Václav Havel, who became the first president of the Czech Republic after the fall of the Soviet Union, wrote an essay called “The Power of the Powerless.” The essay is about life under Soviet control, and it describes ordinary man, a manager of a grocery store, who is not so different from Resartus’ Bob. In the essay, Havel explains that the manager puts up a political sign in his window not because he believes in it, but because it’s easier to go along than resist.

I think it can safely be assumed that the overwhelming majority of shopkeepers never think about the slogans they put in their windows, nor do they use them to express their real opinions…He could be reproached for not having the proper decoration in his window; someone might even accuse him of disloyalty. He does it because these things must be done if one is to get along in life. It is one of the thousands of details that guarantee him a relatively tranquil life “in harmony with society,” as they say…

His expression of loyalty must take the form of a sign which… indicates a level of disinterested conviction. It must allow the greengrocer to say, “What’s wrong with the workers of the world uniting?” Thus the sign helps the greengrocer to conceal from himself the low foundations of his obedience, at the same time concealing the low foundations of power. It hides them behind the facade of something high. And that something is ideology.

While the parallel between Bob and the grocer is not perfect, and their governments of course are very different, the similarities between the two men are enough to cause unease.

Both the grocer and Bob assent to slogans and truisms they do not quite understand, put up flags or signs they do not quite believe, in order to get along. Their obedience comes not out of conviction, or love, or a noble desire to achieve something good. It is imposed by an ideology that takes precedence over conscience, and often over truth.