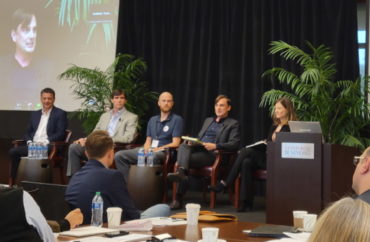 Critics of a two-day Academic Freedom Conference underway at the Stanford Graduate School of Business have bemoaned it as a “hermetically-sealed event, safe from any and all meaningful debate.”

Turns out, they could not have been more wrong.

Day one of the conference on Friday proved that while panelists and attendees generally agree higher education is broken due to a lack of intellectual diversity, free speech and academic freedom, they are divided on how best to solve the problem.

Not only that, conference panelists and attendees — made up mostly of professors from across the nation who are either Democrats, conservatives, centrists, classical liberals or libertarians — were not shy about voicing their contrasting opinions as the day progressed and two trains of thought emerged.

One side believes there’s no saving higher education from within. The other thinks it can be salvaged.

“The boards [of trustees] are a bunch of people who don’t know anything about universities who are the only ones who have the power to change anything,” UT Austin finance Professor Richard Lowery said. “… What are the chances that your board is actually going to step up and do anything?”

Making matters worse, he added, universities are so rich it makes them immune: “No matter how awful these places get, they still have tens of millions of dollars. So what could we do? They won’t go bankrupt and the boards are useless, they won’t fix anything.”

Lowery’s idea is to treat higher education like a product and give it the “tobacco company treatment.”

“What happened to the tobacco companies? People turned on them,” he said. “We could do that if we really put a lot of effort into showing what actually is going on in these universities. Philip Morris is fine because they are actually selling something that’s enjoyable — universities are only selling their reputation.”

“The sustained ideological drift of universities has been a 50-year project,” he said. “The only possibility for increasing academic freedom must be the creation of new institutions … the existing institutions will not fix themselves.”

“Why would an institution 98 percent to the left vote to change itself? It’s not going to happen.”

Former UCLA anthropology Professor Joseph Manson challenged the conference’s stated goal of focusing “on the organizational structures leading to censorship and stifling debate and how to repair them.”

He said addressing organizational structures will not resolve the primary cause of the problem, what he called the “religion of wokeness.”

“You can’t expect to talk such people out of their beliefs, or change their behavior,” he said.

Manson said the solution lies in “new universities, like the University of Austin, new scholarly societies, new journals.” He acknowledged “the obstacles to this approach are formidable,” citing funding and legitimacy as two main concerns.

But “in spite of all these challenges, I think the prospects are better for building new institutions than repairing established ones. … Alternative institutions that have genuine academic freedom … will draw better students and create better research, and maybe even produce more money,” Manson said.

The “if you build it, they will come” idea was met with some skepticism — one professor challenged the notion that driven and intelligent students will pick emerging institutions over established, highly reputable ones.

Ferguson, a founding trustee of the University of Austin, which launched last year as a budding institution where a traditional, unfettered and classically liberal education could occur, gave a full-throated defense of breaking away from traditions.

“I think people will be choosing to come to the University of Austin over Princeton and Yale and Harvard and Stanford within 10 years,” he said. “And the reason I think that will happen is that there is so much dissatisfaction amongst young people today with the status quo. They are thoroughly fed up with the woke campus.”

But while some scholars argue for the breakaway, several at the conference urged change from within. Among them was Duke University Professor Peter Arcidiacono, who called for “courage, compassion and community” on campuses to build bridges and resolve conflict.

“I think all three of those are super central to preserving the academic freedom that we are looking for,” said Arcidiacono, an economist who is working against Harvard University’s use of affirmative action.

“I think part of the reason I have been able to survive given the views that I have, given the research that I have done, is because of my relationships with people who disagree with me,” he said.

Another Duke University scholar, John Rose, associate director of the Civil Discourse Project, also defended working from within to be the solution scholars want to see at their schools.

“I am in favor of fixing the existing institutions,” said Rose, who leads classes that teach students how to have civil discourse on hot-button topics.

The students he teaches yearn for debate and resent how it is stifled, he said.

“If you want to create a culture of free speech on campus, it needs to start with the students in the classroom, not with faculty and administration. … Students aren’t the problem, they are the solution,” Rose said.

While the debate continues, University of Chicago Professor Dorian Abbot proposed some “practical solutions” to ensure and enshrine freedoms on campuses.

“The number one thing is public support, the woke stuff is super unpopular,” he said.

Alumni are also key, Abbot said, citing alumni networks such as the relatively new Cornell and MIT free speech alliances: “People who really care about their institutions that they came from and they want to work with faculty and try to improve the situation — that’s a big strength.”

Abbot also encouraged conference attendees, which includes more than 100 faculty from across the nation, to “work hard” and get involved on their campuses in decision-making processes.

“Many of us, we are interested in our scientific or other scholarly research, and we are not necessarily interested in going and sitting in a bunch of stupid faculty meetings or sitting on committees to decide who the next dean is or whatever,” Abbot said. “But I think we’re going to have to do that, because the other side is doing that. That’s what working within institutions looks like.”

For example, at the University of Chicago, a group has been started called “UChicago Free,” he said. It includes about 50 faculty members who discuss academic freedom and free speech topics through a listserv, as well as strategize together, such as getting like-minded peers elected to various faculty senate positions, he said.

Stanford political science Professor Rob Reich, commenting on the problems with higher education juxtaposed with emerging solutions, summarized both sides by noting “it’s the best of times for American higher education — the envy of the world — and also the worst of times in other ways.”