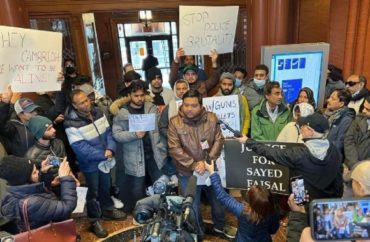 Student appeared suicidal, move toward cops with a knife

Activists quickly condemned the fatal police shooting of a University of Massachusetts-Boston student who tried to harm himself and wielded a knife while ignoring police commands.

At 1:15 p.m. Wednesday, a 911 caller reported that Faisal had jumped out of a window and appeared to be harming himself, according to a CPD press release. After a chase through several blocks in Cambridgeport, Faisal allegedly moved toward officers while wielding a kukri knife. A CPD officer shot Faisal with a non-lethal sponge round, the release said, and when this did not stop Faisal, an officer fatally shot him.

The district attorney’s office has launched an investigation and the officer is on administrative leave, according to The Crimson. The police department provided further details on its Facebook page and in a media briefing.

The January 5 protest was “attended by more than 50 people, including friends and family members,” according to the Harvard university student newspaper. “Some held handwritten signs reading ‘CPD IS NO EXCEPTION,’ ‘Justice for Sayed Faisal,’ and ‘We Don’t Trust Your BS Investigation.’ Sayed Mujibullah, Faisal’s father, stood among the demonstrators with tears in his eyes.”

“Former student of UMass Boston, where I go to school, was murdered by Cambridge police. This is heartbreaking and unacceptable,” Green wrote on Facebook. “Having to fundraise after police brutality is not an acceptable solution, we must hold the police accountable to stop murdering people, especially people of color,” she wrote, before directing people to support a fundraiser for Faisal.

The Bangladesh Association of New England organized a fundraiser and is promoting rallies to protest the shooting.