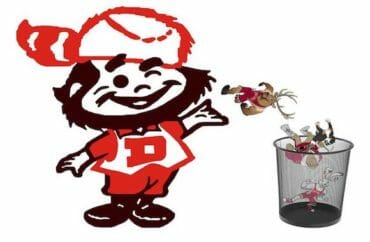 Say what you want about progressive culture warriors in modern academia: they provide a useful lesson for us all, insofar as they show us how to be fanatically, single-mindedly determined even unto the point of embarrassment.

The case of the University of Denver mascot is a helpful illustration in this regard. As The Fix reported yesterday, students at that school are protesting to change the school’s team name, “the Pioneers,” because—wait for it—that name represents “westward expansion, genocide, oppression, [and] assimilation of Native American students.” Well, okay. In truth there are probably only about five or six people in the state of Colorado who are genuinely scandalized by the term “pioneer,” an American cultural touchstone anodyne enough to be almost meaningless. But social justice warriors are committed to being offended about virtually everything that exists, and so they have launched a campaign to memory-hole a word nobody is bothered by for a reason nobody believes.

That in itself is comical enough. What is instructive is this: aggrieved liberals at the University of Denver already scored a victory on this front several years ago, when the school deep-sixed its mascot, “Denver Boone,” because the white pioneer figure was “a polarizing figure that did not reflect the growing diversity of the DU community.” Indeed, the character was “an image that many women, persons of color, international students and faculty members found difficult to relate to.” Which is odd: when was the last time anyone was able to “relate to” a school mascot in any meaningful way? The mascot of my own alma mater is a sheep named Rodney. Does anyone relate to him? If so…how?

Terminating a cartoon sport mascot out of deference to various identity groups is more or less the height of campus liberal politics. Nevertheless, here we are, a few years later, and the outrage machine is once again in full swing: Denver Boone had to go, and now so to do the “Pioneers.” What this proves is something we already knew: that campus social justice warriors are not, nor will they ever be, satisfied. The point here is not to affect some real kind of change that will improve the quality of live at the University of Denver. The point is to be outraged by one thing after another, lurching through a succession of moral indignations and forcing people to accommodate your own silly vanities. To their credit, it tends to work.

If I had to guess, I would say that the activists at Denver will likely succeed, and the “Pioneer” nickname will go into the dustbin of Colorado history. Then maybe they’ll be satisfied, for a while. But make no mistake: something else will draw their anger. Something always does.