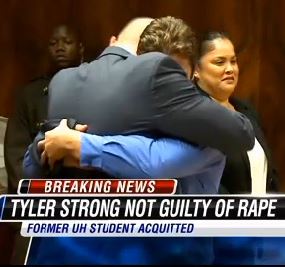 He said their dorm-room sex was consensual. She said it wasn’t. In the end, the jury believed him.

Former University of Hawaii-Manoa student Tyler Strong, 19, was acquitted Friday of rape stemming from an incident that occurred Sept. 21 after a night of drinking. The jury deliberations took four days to weigh the three counts of sexual assault charges filed against the teen. If found guilty, he faced up to 20 years in jail.

An emotional Strong spoke to reporters after the verdict, saying “I am very relieved, and truth will win out, and this is a great example of the fact that the truth does set people free.” But Strong also has some words of wisdom for his male college peers.

“Understand that society today doesn’t favor young men, and you need to, as a young man, protect yourself,” he said.

“It’s been six months of hell,” she said. “I would just say that, like my son said, if you are a young man in today’s society, our pendulum has swung the wrong way.”

According to Hawaii News Now, much of the testimony had centered on whether the young lady who lodged the allegations gave verbal affirmative consent to their intercourse:

Strong said he was close friends with the accuser before the incident on the morning of September 21.

“We were flirtatious. We also shared intellectually intimate moments with each other.”

Strong, now living at home in Oregon, testified he and the accuser had spent the night with each other on a previous occasion. “We kissed and cuddled all night, then slept.”

He said on the night of September 20, there was drinking in his dorm room. The girl was there, but left between 11:30 and midnight. Later, after a series of text messages between the two, the girl returned to Strong’s dorm.

“What was going through your head at this point?” asked his attorney Jeffrey Hawk.

“That she wanted to sleep with me, tonight,” Strong answered.

Once in his bed, the two started kissing, and had sex.

“When you started to have sex with her, did she say no?” Hawk asked.

“No she did not,” replied Strong from the stand.

“Did she say stop?” Hawk continued.

“No she did not,” Strong answered.

Strong testified it was after the encounter that the girl became distraught and started crying before leaving the dorm room. Under cross examination, the state tried to show that the alleged victim did not give consent.

“No she did not,” Strong answered.

“She didn’t say ‘yes Tyler, I want to have sex with you,’” said Yamamoto during cross examination.

“No she did not,” Strong replied.

According to a report from KITV Honolulu, Strong had added during testimony that the young lady’s physical actions that night were clear:

“When you started to have sex with her did she say no?” said defense attorney Jeffrey Hawk.

“Did she do anything to indicate she didn’t want to do this,” said Hawk.

“No, in fact she was continually kissing me the entire time, pulling me closer to her body,” said Strong.

Strong indicated his belief was the night was the culmination of a developing relationship, a belief that the prosecution tried to shoot down.

The 18-year-old accuser had testified Strong raped her, that she repeatedly told him to stop. She said on the stand that she ran out of the dorm room in tears after and collapsed on the campus grounds, according to news reports.

But there was no evidence of physical assault. In the end it was her word against his.

In closing arguments, Hawk pointed out that the young lady had admitted that she went to Strong’s room to get a guy she liked jealous.

“In her own words, she wanted to get revenge. She knows Tyler’s alone. She knows Tyler wants to be with her. She picks Tyler and she goes there,” Hawk had said. “Who goes to a friend, someone you like, someone who trusts you and decides to use that person to get back at someone else? Its deceptive, manipulative and just plain crazy.”