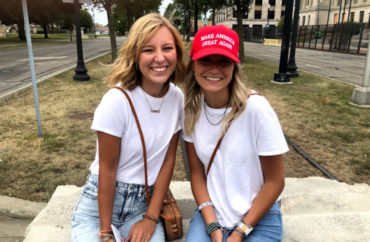 KENOSHA, Wisc. — Even after a week of violent protests that have left their city burned and battered, sisters Emily and Olivia Zank remained undeterred in their support of President Donald Trump.

“I feel like everyone here is very enthusiastic about him being here at the moment,” said Emily, a sophomore at Carthage College in Kenosha studying biology and secondary education.

On Tuesday, the sisters, both college students, traveled to Civic Center Park to support Trump during his visit to Kenosha, where 29-year-old black man Jacob Blake was shot seven times in the back by police on August 23. Since then, the city has devolved into rioting and looting, with buildings and cars being burned to the ground.

“But I feel like people that support our president are very excited that he’s coming and that he sent in the National Guard when he did and that he’s trying to fix our community.”

“Him sending in the National Guard really saved our city, for sure,” said Olivia, adding that once Trump granted help to the Wisconsin governor, “there was much less of the violent part of the riots going on.”

“I think a majority of the people are excited he’s here,” said Olivia, an incoming freshman at Gateway Technical College who hopes one day to become a flight attendant.

Trump’s visit drew a crowd, many of whom appeared to be college-aged. 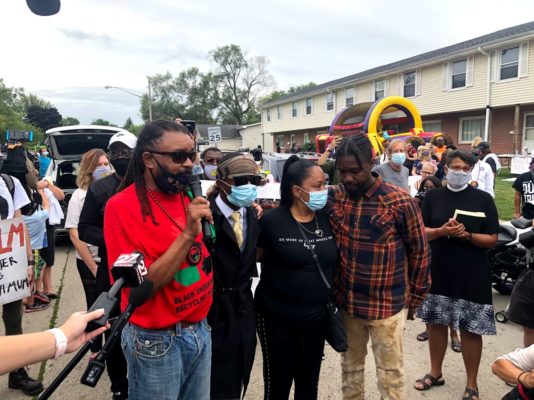 As Emily and Olivia waited for the president, Carthage College campus pastor Kara Baylor (pictured, far right) offered a prayer across town at a cookout held in honor of Jacob Blake, who is still hospitalized and is reportedly paralyzed from the waist down.

Baylor invoked the Biblical story of the “feeding of the multitudes,” as protest attendees ate hamburgers and hot dogs.

“It is the story of people longing for healing, and a healer, who sees the pain and compassion for them,” Baylor told the crowd at the cookout, which was held on the spot of Blake’s shooting.

Police were called to the property a week and a half ago to respond to a domestic disturbance, and found Blake, who had an outstanding warrant for felony sexual assault. After wrestling with an officer, Blake walked toward his car as the cops had their guns trained on him. As Blake leaned into the car, he was shot seven times in the back. After the shooting, the police found a knife on the floorboard of the car.

The shooting, which was filmed by a neighbor, became national news, and sparked rioting in cities across Wisconsin.

In Madison on Aug. 25, windows were smashed and dumpsters set on fire. Prior to the riot, activists consisting mostly of white college-aged participants, marched around until midnight.

They also listened to speeches at the University of Wisconsin-Madison.

Then organizers announced “shit was about to go down” at the courthouse, and many of the college-aged activists appeared to slink away.

“P.T.S.S. is a theory that explains the etiology of many of the adaptive survival behaviors in African American communities throughout the United States and the Diaspora,” writes DeGruy on her website. “It is a condition that exists as a consequence of multigenerational oppression of Africans and their descendants resulting from centuries of chattel slavery.”

According to DeGruy, P.T.S.S. can manifest itself in “Violence against self, property and others, including the members of one’s own group, i.e. friends, relatives, or acquaintances.” 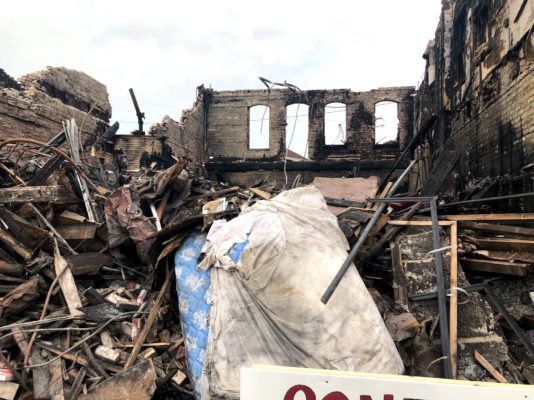 There were other academics willing to support property destruction in Wisconsin after the Blake shooting.

University of Wisconsin-Madison Gender and Women’s Studies Professor Sami Schalk has supplied Kenosha protesters with water, snacks, first aid supplies, and urged protesters not to “video tape folks doing anything illegal,” to “wear black,” and “wear shoes you can run in.”

But Emily Zank said the property destruction has done more harm than good.

“Especially since our Uptown got most of the destruction – Uptown houses most of the minorities of Kenosha, and that’s the area that got really destroyed,” she said.

“Destroying their community – what does that do for the people in this movement?”

Trump’s Tuesday trip went off without incident, as the president met with local elected officials and toured burned out buildings.

Both sisters think the Kenosha riots will help Trump win Wisconsin in November.

“Most of the places and cities where this is going on are run by Democratic governors and mayors or whatever, so what he did was perfect and helped us,” Olivia said.

“This is our city we are talking about – when the protests started, it was no longer people from the Black Lives Movement coming in to protest, it was people coming in from all over the country, just trying to destroy our beautiful city,” said Emily.

“As a city we’re not able to withstand that damage by ourselves.”