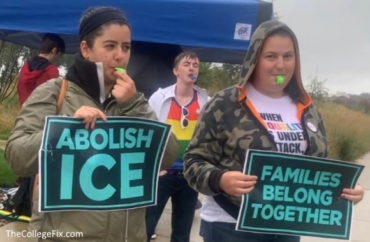 Attorney General William Barr urged future attorneys to protect religious liberty in the face of secularization’s “assault” on religion at a speech Friday at the University of Notre Dame’s law school.

“We must be vigilant to resist efforts by forces of secularization to drive religious viewpoints from the public square and to impinge upon our exercise of our faith,” said Barr, a devout Catholic.

Schools are “ground zero” for these attacks on religion, Barr said, calling this “the most serious challenge to religious liberty today.”

The private speech was given at the law school’s McCartan Courtroom and was only open to law school students, staff and faculty. The Friday afternoon talk drew about 50 protesters, who congregated at the edge of the private South Bend campus and continuously blew shrill whistles.

The protest, called “Whistles for Whistleblowers,” was planned by Move On North Central Indiana and Indivisible Indiana District 2. Atheists for Indiana also attended. While some young people took part, most in the demonstration did not appear to be students from Notre Dame.

The activists blew whistles in reference to the whistleblower complaint against President Donald Trump. They held signs stating “Impeach both!” and “Keep your theocracy off my democracy.”

In his speech, Barr did not mention the impeachment inquiry.

Instead, he cited LGBT curriculum in New Jersey public schools, a lawsuit against the Archdiocese of Indianapolis for firing a man because of his same-sex marriage, and state policy which limits funds to religious schools as challenges to religious liberty.

“We see the state requiring local public schools to insert themselves into contentious social debates without regard to the religious views of their students or parents,” Barr said.

Speaking on the lawsuit against the Archdiocese of Indianapolis, the attorney general said it “clearly infringes on the First Amendment rights of the archdiocese by interfering both with its expressive association and with its church autonomy.”

He added the laws are used as a “battering ram to establish moral relativism.”

In contrast, the framer’s vision of America, according to Barr, was one where religion was present and necessary for the flourishing of the country.

“Our Constitution was made only for a moral and religious people,” Barr said. “It is wholly inadequate for the government of any other.”

“The imperative of protecting religious freedom is not just a nod in the direction of piety. It reflects the framers’ belief that religion was indispensable to maintaining our free system of government.”

Barr argued the “campaign to destroy the traditional moral order” has coincided with “immense suffering and misery,” like the wreckage of the family, record levels of depression, the drug epidemic, an increase in violence, and soaring suicide rates.

“I do not mean to suggest that there is no hope for moral renewal in our country,” Barr said. “But we cannot sit back and just hope that the pendulum is going to swing back towards sanity.”

“I can assure you that as long as I am attorney general, that the Department of Justice will be at the forefront of this effort, ready to fight for the most cherished of all our American liberties: the freedom to live according to our faith,” he said.

“This system allows us not to worry so much about the strictures on our own private lives because we can find salvation on the picket line,” he said.

As he spoke, the demonstration against his appearance took place off campus under sometimes rainy skies. Other signs that peppered the event included “Families belong together” and “Abolish ICE.” One activist held an image of the United States capitol building which read “This is not a church.”

“Attorney General Barr has no soul!” shouted one protester on repeat.

Barr’s speech was sponsored by the Notre Dame Law School and the de Nicola Center for Ethics and Culture.