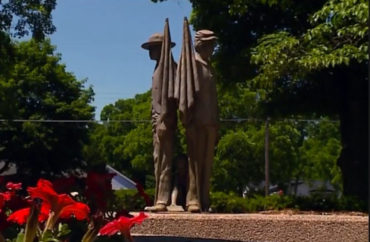 Despite pleas from a neighboring college president, a Western Michigan township has opted to keep a controversial statue of a Confederate soldier up in a local park.

Following a year of protests, Allendale Township leaders this week voted against removing the statue, rejecting a May 24 recommendation by the town’s Garden of Honor Memorial Committee to take it down.

Christina Burna, one of the Garden of Honor Memorial Committee members opposed to removing the statue, told the committee “we can’t let outside people continue to divide our community,” urging the committee to reject “woke mob culture.”

“First, given the discord between the statue’s educational value and its symbolism, I would request consideration of relocating it within the township to a space that would allow for proper historical context and dialogue,” Mantella wrote. “We have a keen interest in your decision, and while our nation’s history is complex, the harm and symbolism the statue represents to our Black and underrepresented community is real, no matter the intentions of the artist,” she wrote.

Roughly half of the township’s 26,700 residents are students and employees at Grand Valley State.

The statue at issue features two men, a Confederate soldier and a Union soldier, standing back-to-back, with an enslaved child at their feet.

The Garden of Honor features a number of statues, including ones honoring veterans of World War I, World War II, the Korean War, the Vietnam War, the Gulf War, and the Spanish-American War. The committee had recommended the current Confederate statue be replaced with one featuring three Union soldiers – one white, one black, and one Native American.

“I hope that you, board members, have listened to the people who are affected and hurt by this statue,” Cathy Seaver, a 26-year resident of Allendale, told the board before they voted to keep the statue. “I hope you have found the compassion and the empathy in you to now do the right thing by removing the racist Confederate statue.”

“We offer to be a part of deepening understanding about the Civil War, slavery, inclusion and why statues such as this arouse passion and pain,” Mantella wrote in her letter. “We can also discuss the role of artifacts in informing our journey and explore the relationship to our value and movements today.”