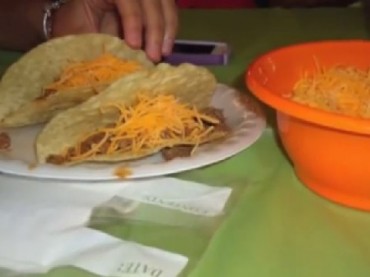 But that longstanding tradition, typically held around Cinco de Mayo, is in jeopardy.

In the past few weeks, pressure from a handful of Latino students at two high-profile universities who complained the events are offensive prompted dramatic changes to two “Pi Phiesta” fundraisers.

At Dartmouth College, the fundraiser was cancelled outright, and at Stanford University, the sorority girls scrapped their Mexican themed “Pi Phiesta” for a summery, ocean-themed one, although they still served tacos. Nevertheless, the future of “Pi Phiesta” fundraisers across the nation hang in the balance as the charitable tradition faces increased scrutiny from the politically correct campus police.

C’mon – how long before the directive comes down from the Pi Beta Phi national headquarters with an “ixnay on the iestaphey.” They don’t want or need the bad press or flack on campuses, and will probably figure: Why bother?

(Editor’s note: A Pi Beta Phi spokeswoman contacted The College Fix on Monday morning to clarify the Dartmouth Pi Phiesta was not affiliated with their group, it doesn’t have a chapter there, and also said “while a couple of Pi Beta Phi chapters have held Pi Phiesta fundraisers, that theme is not recommended and only a few of our 136 chapters host one.” So I guess the smackdown on the theme has already taken place.)

The real losers, however, are the nonprofit efforts these events help support; all-you-can-eat taco bars get lots of warm bodies through the doors.

These particular sorority charity events are hardly offensive, and if anything – they celebrate and honor Mexican heritage.

A YouTube video of a “Pi Phiesta” taco night last year shows a bunch of students stuffing their faces with tacos, smiling, and raising a wad of cash for literacy causes.

In the pictures on various Pi Beta Phi websites, one might see an occasional sombrero-donned student or some maracas among the bright yellow-orange decorations and neon-colored T-Shirts; hardly offensive.

The fact that this is for charity and done without malicious intent is apparently of no consequence to the handful of aggrieved militant Latino students on campuses with a machete to grind.

They accuse such events of “cultural appropriation” – defined by the Stanford Daily as “actions that trivialize aspects of a culture by not respecting a custom’s symbolic significance or the history of a style of dress or other artifact.”

If that’s the case, maybe piñatas should be outlawed across America – because who cares about the glee those little twerps experience when they have candy rain down on them like Niagara Falls? They’re appropriating Mexican culture for their own joy, and for shame. In the same vein, that 21-year-old female student who throws on a sombrero and serves up tacos to raise money to help an inner-city child learn how to read should be told what an insensitive twit she is.

PUT THE TACO DOWN, NOW!

Oh, the plight of the Latino college student. They face so much bigotry.

Give me a break.

This whole white-people-who-celebrate-Cinco-de-Mayo-are-a-bunch-of-ignorant-and-offensive-buffoons movement is absolutely ridiculous and completely out of control.

During this most recent Cinco de Mayo observance, not only did these “Pi Phiestas” get derailed, but:

A sign at UCLA this month offered students a guide to a “racist-free Cinco de Mayo,” advice that included warning students not to speak their shoddy high school Spanish on the day.

At North Carolina State University, its dining services officials had to apologize for handing out “offensive” chocolate mustaches for dessert on Cinco de Mayo.

A similar kerfuffle also occurred at the University of Maryland after two Latino students were offended when the university’s dining services staff voluntarily wore fake mustaches and sombreros during its Cinco de Mayo dinner.

It’s just the latest in an established trend on campuses.

The irony of this whole situation is – Latino students should be careful for what they wish for, because they just might get it.

Imagine May 5 on campus with no tacos, no sombreros, no mention of anything Mexican at all. Head into the cafeteria and be greeted with spaghetti and meatballs and Foo Fighters playing on the stereo.

They’re whitewashing their own observance.