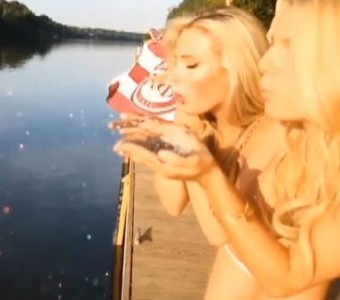 ‘Have we really reached a place where universities have to apologize because their sorority bid videos are too hot?’

Sometimes the P.C. police take things too far, and such was the case this week when a four-minute video showcasing young Alabama sorority women dancing, smiling, blowing kisses and frolicking in their bathing suits, sundresses and daisy dukes amidst glitter and bubbles was taken down and reprimanded.

The University of Alabama sorority recruitment video had prompted anger among some who believe it objectified women and showcased a lack of diversity. An op-ed shared all over Facebook and picked up by national news outlets chided the Alpha Phi video for being too white and unempowering to women. It even went so far as to say the video was “worse for women than Donald Trump.”

The university then scolded the sorority sisters for not being “responsible digital citizens.” The gals took down the video. Copies popped up. The story went viral, and many stood up and said: Enough is enough.

“Stop Hating On Sororities For Being Hot And White” was the headline of a Total Frat Move post by Dillon Cheverere that rightly pointed out:

Sororities aim to recruit and initiate like-minded young women. This video looks like a bunch of like-minded girls to my eyes.

If the university’s chess club put together a recruitment video featuring every member of their club, would you be up-in-arms if it showed nothing but nerdy white kids?

If the university’s hip-hop club put together a recruitment video featuring every member of their club, would you be up-in-arms if it showed nothing but young black people?

Like-minded students who relate to one another — it doesn’t make them exclusionary. It means they want to hang out together, and that’s not cause for a public shaming.

Fox Sports writer Clay Travis, in his piece titled “Alabama Apologizes For Hot Sorority Video,” vented his frustration with an “are you f*cking kidding me?”

“Have we really reached a place where universities have to apologize because their sorority bid videos are too hot? Has Alabama been overrun by ISIS? Should the girls have done their video in burqas?” he continued. “… What in the world is improper about this video?”

“There’s no drinking, there’s no drugs, there’s no nudity, there’s a lot of girls being happy and playing fake football in Bryant-Denny Stadium. Was it accurately reflective of real life? Probably not. For instance, I don’t think any girls at Alabama would actually beat running back Kenyan Drake in a forty yard dash.”

Writing in the Huffington Post, Tyler Kingkade makes the point that:

The Alpha Phi video — which does not depict nudity, excessive alcohol consumption or any activity that appears to be illegal — isn’t very different from the Alpha Phi recruitment videos at Penn State University or the University of Arizona, or the recruitment videos made by other sororities all the time. Such videos are often celebrated on websites aimed at the collegiate and Greek life crowds. They’re appreciated by Bailey’s “hormonal college-aged guys,” yes, but also by women-oriented sites like Total Sorority Move, whose Rachel Varina criticized the controversy in a Monday column as something that’s “almost so absurd, you can’t even be mad.”

Even female students at the University of Alabama have rushed to the defense of their peers.

In an op-ed in The Crimson White campus newspaper, students Leigh Terry and Sarah Huff Moore argued that “this university should not forget that many of the women it denounces today are the ones it depends upon to recruit the students of tomorrow and feed its unending growth.”

“To the women of Alpha Phi, these writers wish we were in a position to give you the apology you deserve or make the negative attention you never deserved go away sooner,” the op-ed continued. “Unfortunately, that is not in our power. However, we congratulate you on your most recent pledge class, thank you for your contributions to this university, and stand beside you. Greek women to Greek women.”