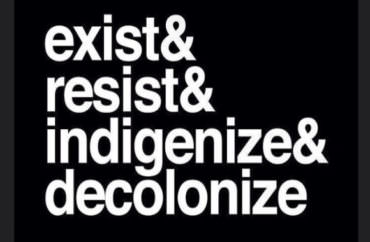 The “all-star symposium” (Ciccariello-Maher’s words) “attempted to define decolonization and discuss ‘its origins and its connection to the histories and memories of a given geographical space,’ as well as the ‘legacies [that] decolonial thinking pass[es] on to contemporary thought.”

According to the event’s Facebook page, the first day featured Ciccariello-Maher on “The Cunning of Decolonization” along with a pair of fellow academics whose talks also included “decolonization” in the titles.

Black Studies professor John Drabinski (whose department hosted the event) explained the confab to The Amherst Student thusly: “[I]t was pretty straightforward: find interesting, creative, innovative and important scholars in our fields … and ask them to come talk about decolonization.”

Much of Drabinski’s own writing and teaching is focused on the idea of decolonization, which for him is defined as the “name for a process of liberation from racially oppressive and exploitative pasts, a way of contesting the everydayness of racist hegemony and domination as well as large institutional structure,” he said.

“It’s about de-centering whiteness and white racial hegemony … against the idea of a center itself, against a fixed measure, against racially exclusive notions of what it means to be human and express your humanity,” he said.

Drabinski added that he believes the college faces, in its own way, “this very issue as it moves from the hard work of diversification to the even harder, even more crucial work of anti-racist struggle … Decolonization is about re-making the world and creating new forms of sociality, politics and culture. That’s a very big issue for nations. It’s also a very big issue for small places like neighborhoods, communities and, yes, college and university campuses.”

Chimaway Lopez ’20, one of the students who attended the Saturday panels, found the topics of the panel particularly relevant to the lives of Amherst College students.

“This event is, I guess, encapsulating a lot of what I’m interested in, intellectually,” said Lopez. “The systems of globalization today that we’re all living in — how different people have theorized colonialism — it’s pertinent to everyone’s experience here at Amherst.”

Since Amherst features an almost $70,000 total cost of attendance, I sure hope you got your “decolonization fill,” Mr. Lopez.

MORE: Students say science should be ‘scratched’ — because ‘colonization and racism’