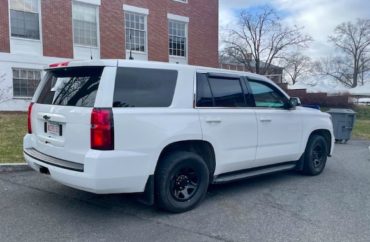 According to The Amherst Student (which provides a “content warning” about police violence in its report), Police Chief John Carter said the unmarking actually is part of an effort to “reduce police presence and help students feel more comfortable.”

Carter added “there is less of a focus on preventive patrol” in which marked cars and uniformed police typically engage.

But last week a poster reading “All ACPD Cars Are Now Unmarked. Do You Feel Safe Yet?” was hung in a campus dining hall. This caught the attention of the Amherst student government.

Several students who spoke with The Student expressed misgivings with the ACPD’s decision.

“[Marked cars] would make us feel safer as we would be able to clearly tell when a police car is near us,” said Nii-Ayi Aryeetey. Student Edmund Kennedy added that unmarked cars make him “feel uncomfortable” and he doesn’t “like the idea of people hiding in plain sight in order to provide ‘protection.’”

One ACPD detective claims several ACPD officers did not agree with the decision to unmark the vehicles.

Cara Sullivan said “[W]e didn’t really like that decision. We didn’t really have much say.” She added she worried students would feel the ACPD is “spying” on them by being not being easily identifiable.

Talia Ward ’23 noted that she and other students had expressed concern with the two originally unmarked vehicles during the Fall 2020 semester. “Last year at a town hall, something we brought up around policing was the unnecessary presence of unmarked police vehicles,” she said. “We were asking the question, ‘What is the purpose of an unmarked car?’”

Student A, who preferred to remain anonymous for their personal safety, was disturbed about the lack of communication around the decision. “To me, going from a marked car to an unmarked car without an email, without anything, that feels like a violation of trust,” they said. “I remember the sinister feeling in my stomach [when I first saw an unmarked car], and I remember calling my father, I was like, ‘Can you believe that we have an unmarked cop car at my tiny college?’”

Interestingly, Student A, who claims they come from a non-traditional background, admitted they had “a history of having a gun pointed at [them] by cops.”

“The point is that nobody is going to like [the cops] because nobody trusts them,” Student A said. “We tell them, ‘I don’t want to wake up in the morning and see your gun in your holster while you’re washing your hands in my bathroom.’”