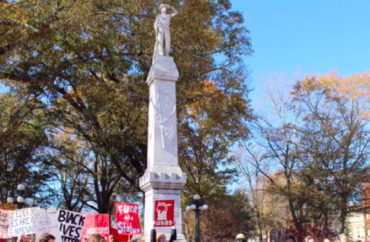 ‘Historical context’ plaques were not enough

Another school is preparing to remove a Confederate monument from its historical place on campus, a sign that the push to dismantle such statues is not yet over.

The University of Mississippi’s Interim Chancellor Larry Sparks “issued a statement that he is in discussion with historic preservation officials on moving the monument elsewhere,” Fox News reports.

The decision comes several years after the university installed a plaque at the statue “to provide historical context about the Confederate monument.” Another plaque was installed on the campus to shine light on “slaves who built some pre-Civil War campus buildings.”

The plaque explains the historical origins of the statue, which was erected during the Jim Crow era, reading:

As Confederate veterans were dying in increasing numbers, memorial associations across the South built monuments in their memory. These monuments were often used to promote an ideology known as the “Lost Cause,” which claimed that the Confederacy had been established to defend states’ rights and that slavery was not the principal cause of the Civil War. Residents of Oxford and Lafayette County dedicated this statue, approved by the university, in 1906. Although the monument was created to honor the sacrifice of local Confederate soldiers, it must also remind us that the defeat of the Confederacy actually meant freedom for millions of people. On the evening of September 30, 1962, this statue was a rallying point for opponents of integration.

This historic statue is a reminder of the university’s divisive past. Today, the University of Mississippi draws from that past a continuing commitment to open its hallowed halls to all who seek truth, knowledge, and wisdom.

Foxreports that the Mississippi Department of Archives and History must approve the removal of the statue, as it is a state landmark. If moved, the statue is planned to be transported to a nearby Confederate cemetery.

MORE: Student arrested after vandalizing campus statue with her own blood