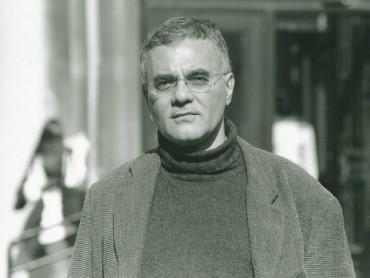 A government professor at Columbia University has been accused of exempting his own financial interest from the anti-capitalist rhetoric he espouses in class.

Mahmood Mamdani, who also directs a Uganda-based institute that questions “market forces” in society, required students last semester to buy his own textbook for a class that “never” used it, according to one of his students.

Ryan Haslauer told The College Fix he was excited to enroll in Mamdani’s “Major Debates – Study of Africa” class, given the professor’s busy schedule and accolades in the field of African studies.

Haslauer himself has a pedigree: A former Marine who served abroad, he received a “global community scholarship” to his local community college, which served as a stepping stone for his entrance into Columbia last year.

But now having seen how Mamdani runs his class, Haslauer has a bone to pick with his professor.

“I was intrigued by the fact it was a major debates class – one with happy, healthy debate,” Haslauer said in a Facebook message, quoting his own evaluation of the course. But Mamdani turned out to be “a hypocritical ‘expert’” who ran the class “like a dictatorship.”

Mamdani focused on “colonialism and the negative repercussions of capitalism … explaining that the white man looking for a profit was the reason Africa is so under-developed,” Haslauer told The Fix in a followup interview.

While that was “perfectly acceptable” curricular choice for Mamdani to make, it was not acceptable to make it “a requirement to buy his book, Define and Rule: Native as Political Science, a book we never used,” Haslauer said via Facebook.

Mamdani gave a lecture on the book shortly after it came out in 2012 at the City University of New York, sponsored by the Center for Place, Culture and Politics.

According to the official Columbia listing for the course, it covers subjects including historiography, state formation, slavery and “political identity” in addition to colonialism and “underdevelopment.”

Haslauer claimed that when other students would ask about these subjects in class, Mamdani would direct them to other assigned readings that had nothing to do with his book, or even his own anti-capitalist narrative as presented in his lectures.

A student who just attended class and took notes, without diving into the heavy list of optional reading assignments, would come away believing the class was designed to bash capitalism and praise socialism, Haslauer said.

Yet Mamdani practiced “selective capitalism at its finest …  making his students buy a useless book [Define and Rule], because we have the extra money right?” Haslaeur wrote.

The former Marine also had criticism for Mamdani’s alleged practice of presenting “regurgitated information” from the week’s readings, “sometimes word for word. After 3 weeks, I stopped taking notes because there was no need.”

As a veteran who has personally seen the successes and failures of other government models around the globe, Haslauer said he felt compelled to share his experience and call out Mamdani for a class that was “run unprofessionally.”

“Major Debates” featured a non-debatable topic presented by “a socialist who is truly a capitalist feeding on the naivetés of college students,” Haslauer said.

Mamdani initially told The Fix he was traveling and couldn’t yet comment on Haslauer’s claims about how he ran the class. The professor, however, did not respond to followup queries over the past month.

UPDATE: Because of an editing error, this story originally said that Ryan Haslauer served in Afghanistan. He did not. The article has been amended to reflect this.