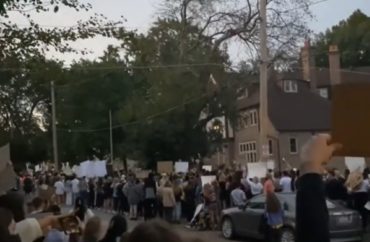 Protests against the Phi Gamma Delta fraternity at University of Iowa caused more than $200,000 in damages and left 28 students without permanent housing according to public documents.

The Gazette, a local paper, filed public record requests for information about the August and September protests against the fraternity, also known as FIJI.

Student activists circulated a petition and led protests against FIJI after news broke that two members allegedly sexually assaulted someone in September 2020. The students are no longer in the fraternity, according to The Daily Iowan. A student filed a lawsuit against the two students, though the campus paper did not link to a copy of it. The investigation is ongoing.

The protests led to broken windows, doors and frames.

Damage to the FIJI house from the raucous protests of more than 1,000 will require repair to 120-plus damaged windows, landscaping, a permanent gas grill, four doors and frames ‘at a cost of over $200,000,’ according to an Oct. 15 email from FIJI Assistant Executive Director Todd Rotgers.

The damage made the house unlivable.

“Given space limitations at the Iowa House Hotel — costing $200 a night on Fridays and Saturdays and $75 to $95 Sunday through Thursday — FIJI also had to book rooms in the Hilton Garden Inn and the Hampton Inn in Iowa City,” the Gazette said.

“FIJI headquarters covered those hotel costs through Sept. 12 — after which displaced members found alternative housing for the rest of the semester,” the Gazette reported, based on a letter from the university’s Greek Life office that the newspaper reviewed.

University officials reached out to FIJI to offer support.

“You’ve had a really tough week+ and I hope you were able to get some rest over the long weekend,” Anita Cory with the dean of students’ office wrote on September 7 to an unnamed frat member.

“I’ve been thinking about you and your fraternity brothers a lot as we’ve reached out to offer support to those who requested additional assistance,” Cory said, according to The Gazette.

The public Iowa university said it will implement further training and transparency for Greek life, according to the Daily Iowan.