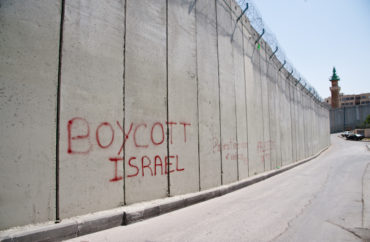 Calls on Swarthmore to divest from numerous companies

In a new petition circulating online, members of Swarthmore University’s Students for Justice in Palestine are calling on their school to “divest from Israeli Apartheid” and “uphold social and ethical concern and responsibility as core values.”

The petition, distributed via Google Docs, declares: “We, the undersigned members of the Swarthmore community, add our voices to the international BDS movement by calling on Swarthmore College to divest from seven companies invested in Israeli Apartheid and Occupation in Palestine.”

“From the development and maintenance of military, surveillance and biometric technology used at IDF checkpoints to the provision of machinery used to illegally demolish Palestinian homes and advance illegal settlement-building in the West Bank, these corporations both finance and profit from apartheid and military occupation in Palestine,” the group claims.

“As long as we support these corporations, we support colonization, occupation, and apartheid. Swarthmore, divest now,” the document finishes.

According to a video posted on the group’s Facebook page on November 11th, the petition garnered around 750 signatures in a week; the group is aiming to reach 1,000. Swarthmore College has an undergraduate enrollment of around 1,650, though it is unclear what percentage of signatures on the online petition, which is an open Google Form, came from students and which came from alumni or outside parties.

In response to the group’s petition, the Swarthmore Students for Israel said that they were “disappointed” and affirmed their support for Israel .

“Israel is an issue that supersedes religious and political lines and we firmly stand with the Pro-Israel community, both Jewish and non-Jewish alike,” the group said, according to The Algemeiner. “As such we recognize the variety of opinions within the pro-Israel spectrum but come together with the sole binding belief that Israel has the right to exist and that the Jewish people have a right to self-determination.”

Matthew Stein, the president of the pro-Israel group, told The College Fix that the divestment petition is “par for the course” for Students for Justice in Palestine.

“Our group is responding to this campaign by organizing events meant to provide a more truthful perspective of the Arab-Israeli conflict, and simply encouraging Jewish and pro-Israel students at Swarthmore to stand proudly and not be intimidated by SJP’s disgusting message and tactics,” Stein said via email.

According to the petition, the Boycott, Divest, and Sanction movement states that “Israel’s decades-long projects of settler-colonialism, apartheid and occupation are facilitated by the support of international corporations and foreign governments.” The movement”places nonviolent pressure on the State of Israel to affirm Palestinian humanity and end its occupation and colonization of indigenous lands.”

The Anti-Defamation League says that “the predominant drive of the BDS campaign and its leadership is not criticism of policies, but the demonization and delegitimization of Israel.”

Students for Justice in Palestine at Swarthmore began circulating their petition for the BDS movement nine days after the deadliest massacre of Jewish citizens in the United States at the Tree of Life Synagogue in Pittsburgh, Pennsylvania.

Update: This article has been updated with a statement from the president of Swarthmore Students for Israel.

MORE: Marginalization of Jewish, pro-Israel students on track to rise this year