A Rutgers University professor has been condemned by pro-Israel groups and his own university for posting memes on Facebook mocking Jews and questioning the Holocaust’s death toll.

In a bizarre email to The College Fix, Michael Chikindas, a professor at Rutgers’s Department of Food Science, claimed that his personal information was “hacked,” though he did not deny that he was the author of the posts.

Earlier this week the set of antisemitic posts was discovered on Chikindas’s personal Facebook page by the site IsraellyCool, a pro-Israel blog. Some of the posts on the professor’s personal page included stereotypical depictions of scheming, evil-looking hook-nosed Jewish men, as well as claims that Israel takes money from starving American children. 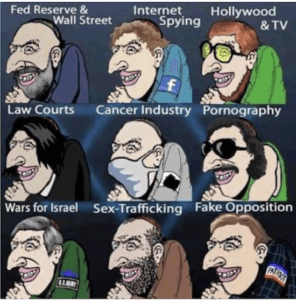 One post made a reference to “international fat Jewish pockets,” while another links to a conspiratorial YouTube video that appears to be questioning central facts about the Holocaust, specifically how many Jews perished during it.

“You do the math,” Chikindas writes of the video, “and make your own, independent conclusion.”

Reached via email, Chikindas denied being antisemitic, telling The College Fix in a long, rambling email that his “personal computer and several public accounts (including Facebook) were hacked,” and that some of the “photographs were modified to make me look ugly.”

The email contains a total of four different “official statements” in which Chikindas writes, variously, that “some of my photographs were modified to make me look ugly,” that he is receiving insulting and hateful messages, “many of [them]…coming from Israel-based individuals of Russian origin,” and that he has “seen not a single comment from any opponent who would oppose [the antisemitic] pictures in a civilized manner, with facts and documents.”

“I cannot say with confidence that everything on my page was shared by me,” Chikindas wrote, adding, in all capital letters: “THERE IS A GOOD CHANCE FOR SOME THINGS BEING PLACED ON MY PAGE BY THOSE WHO HACKED MY ACCOUNT.”

Rutgers University has released a statement condemning the posts and labeling them “antithetical to our university’s principles and values of respect for people of all backgrounds, including, among other groups, our large and vibrant Jewish community.”

The founder of IsraellyCool, whose public name is Aussie Dave, staunchly denied the hacking accusation, telling The Algemeiner that “I do not know how to hack sites and personal computers, nor would I ever do such a thing on principle… Someone needs to explain the concept of public Facebook posts to Mr. Chikindas, which can be viewed by anyone who visits a Facebook profile.”

An Israel education organization called StandWithUs sent The Fix a statement condemning the “blatant anti-Semitism and homophobia” present in Chikindas’s posts. StandWithUs CEO Roz Rothstein added that the organization calls on the Rutgers administration “to do everything in their power to hold this professor accountable for his hate speech against the Jewish and LGBTQ communities.”

Chikindas told The Fix that he did not believe his posts to be antisemitic because the “pictures [he] shared from other Facebook pages were not removed by the Facebook mediators which made me think they are not violating any rules.”

“I do not identify myself as Antisemite [sic]. It is my lifelong credo that all people are born equal regardless of their ethnicity, religion and wealth,” Chikindas continued. “Should I knew [sic] that sharing these freely available pictures questioning Zionism on possible racist actions can be seen as Antisemitic, I would never do it. I strictly separate Antisemitism from intolerance to Zionism.”

Chikindas said that he feels “extremely insecure with [his] health and life being threatened in numerous written and verbal messages.”

The Fix reached out to the Food Science Department at Rutgers via email but did not receive a response in time for publication.

Rutgers Hillel, the university’s Jewish living community, released a statement saying that “any Jewish or gay student would rightly fear taking a class with a professor who publicly expresses such vicious and hateful prejudice,” but that “despite these serious and disturbing matters, we reaffirm our confidence that ‘Rutgers Is a Great Place To Be Jewish.’”

Rutgers University has had issues with antisemitism accusations in the past. Another Rutgers professor, Jasbir Puar, was accused of antisemitism last year, facing criticism for her article suggesting Israel harvests the organs of Palestinians, and for her suggestion that Israel engages in “pinkwashing” and a “gay propaganda war,” the practice of promoting the rights of LGBT Israelis in order to cover up war crimes.

Additionally, a pro-Palestine event was held at Rutgers a few years ago which drew accusations of discrimination against Jewish and Zionist students.

A recent report by Brandeis University revealed a high prevalence of antisemitism at Rutgers, along with the universities of Wisconsin and Illinois, with The Times of Israel reporting that “hostility toward Jews and antisemitic harassment [at these universities] are relatively high but do not seem to be highly connected to criticism of Israel.

At these schools, The Times reported, “more traditional antisemitic stereotypes and tropes, rather than criticism of Israel’s politics, seem to be driving the perceived hostility toward Jews.”