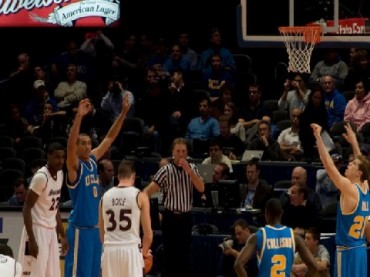 Serving students who are away from their home congregations for games

A group that opposes religion in the public square is trying to get rid of chaplain programs on a handful of college basketball teams, claiming they violate the separation of church and state.

The universities, as well as a public interest law firm that defends religious freedom, beg to differ.

Less than a week later the Alliance Defending Freedom told the schools in letters to ignore the foundation’s reasoning, stating that universities actually have “great leeway in accommodating the religious needs of their students.”

Although the alliance admits this specific issue has yet to be litigated, it is sure the courts would agree.

Plenty of leeway to help those who travel for ‘government services’

The group’s letters cite all of the places “church and state” do not separate, including in the military, prisons, hospitals, police departments, airports and even legislative ceremonies.

“Courts upheld chaplain programs in a variety of contexts where citizens are removed from their congregations due to their government services,” alliance legal counsel Travis Barham told The College Fix in a phone interview.

He includes student-athletes under this umbrella of government services, saying the Constitution gives public universities significant leeway in chaplain programming.

“What the universities are doing by allowing these chaplains to continue is to accommodate students away from their usual congregations, because they are serving their university community” by going on the road for games, he added.

Wichita State, Maryland and Oklahoma all have chaplains from Nations of Coaches, a religious organization available to coaches across the country to provide “spiritual support,” according to the foundation. Nations of Coaches did not respond to interview requests. Half the schools have responded to the alliance, according to Barham.

Louisville is keeping its chaplain, Father Ed Bradley, because he is considered a volunteer. Wichita State is doing the same with its Nations of Coaches chaplain, while Virginia has handed the case over to its lawyer for review.

Louisville and Wichita State athletic programs did not respond to Fix inquiries.

The foundation told The Fix the chaplains are superfluous for the players’ religious needs.

“There is simply no need to accommodate basketball players’ religious beliefs with chaplains,” Andrew Seidel, constitutional consultant for the group, wrote in an email.

“Most schools have religious student groups and campus organizations that exist for precisely that purpose,” he said.

The foundation chose the six schools based on complaints from locals and because they are publicly funded.

“Religious individuals are trying to use public schools and the machinery of the state to promote their personal religion. This is simply a perennial problem, with simply a new twist,” Seidel wrote.

Seidel believes “without doubt some of [the students] are coerced into participating in religious rituals in which they disagree.”

Barham took issue with that allegation: “Chaplains are not forced on anyone … the chaplains are simply a resource that interested students can use.”