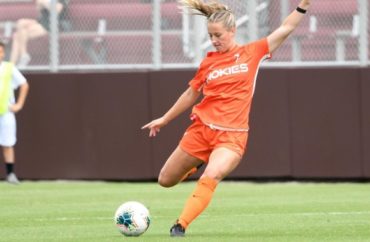 Soccer coach accused of punishing player for not kneeling for BLM

Virginia Tech attorneys have agreed to a $100,000 settlement with a female soccer player who alleged that she lost playing time after refusing to go along with the woke agenda of her coach.

However her former coach stated that he had actually won and that the settlement proves he was telling the truth.

Kiersten Hening (pictured), alleged she lost playing time for refusing to kneel during a “unity statement” in 2020, a cause supported by her coach, Charles “Chugger” Adair, and some members of the team.

Her attorney Cameron Norris shared the details of the settlement with The Roanoke Times, which noted no records exist yet as university officials must still approve the settlement.

Coach Adair wrote on social media that he won and that his former player had no “standing” to move forward.

“I am pleased the case against me has been closed and I am free to move forward clear of any wrong doing,” Adair tweeted Wednesday.

“It’s unfortunate, but this ordeal was about a disappointment and disagreement about playing time,” he wrote on Twitter. “Today, we have clarity that this case lacked any standing, and without evidence, the truth has prevailed.”

However, according to the Roanoke Times, that is not exactly what happened. The paper noted that Adair made no mention of the $100k payment in his tweet.

“The settlement was reached shortly after U.S. District Judge Thomas Cullen denied a motion by Tech to have the case dismissed in early December,” the paper reported.

“A three-day trial scheduled to start later this month was cancelled Tuesday in a court filing that said only: ‘Case settled,’” the paper reported.

“In allowing the case to move forward, Cullen said there were factual disputes that needed to be decided by a jury,” the paper reported.