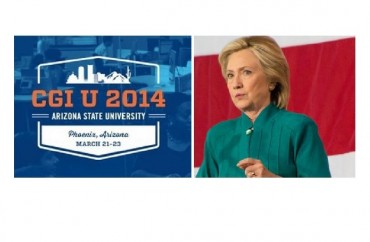 Several campuses hosted Clinton Global Initiative University for free. So why did ASU shell out a half-million dollars?

Arizona State University paid $500,000 to host a Clinton educational conference that other universities have hosted for free, The College Fix has learned.

The Clinton Global Initiative University has been held annually since 2008, and The College Fix reached out to each campus that hosted the conference to determine how much the Clintons charged for each event.

Arizona State, which hosted the event in 2014, paid $500,000 for the three-day conference, with campus leaders calling it a “marketing expense” and suggesting the Clinton symposium brought prestige to the university. But the decision was decried by many as a wrong move for a public university that’s hiked tuition and faced budget cuts.

In contrast, at the University of Texas at Austin, another public university that hosted the Clinton Global Initiative University, not only did the campus not have to pay for the event, the foundation reimbursed it for some expenses.

“Once expenses for hosting the event were identified, our Student Government issued a reimbursement request for $28,851.15 to the Clinton Global Initiative – University. Reimbursement for that sum was received by Student Government,” Joshua Cook, a spokesman for UT Austin, told The College Fix in an email.

The George Washington University, which hosted CGI University in 2012, also didn’t pay for the conference.

“The George Washington University was honored to host the Clinton Global Initiative University in 2012. As part of our partnership, we provided space on our campus and many of our students participated and volunteered during the meeting. We did not pay an honorarium to host,” a campus official stated in an email to The College Fix.

Moreover at Tulane University, where the event debuted, an official there also confirmed to The College Fix via email that the campus did not pay anything to host the event in 2008, when former President Clinton kicked off the debut with a speech to more than 700 people.

Several other private universities declined to state whether they paid anything for the event, however.

At the March conference at the University of Miami, Bill, Hillary and Chelsea Clinton headlined the festivities. For the last 14 years that private university was run by Donna Shalala, who served at Secretary of Health and Human Services under President Clinton. Now Shalala is chief executive officer of the Bill, Hillary & Chelsea Clinton Foundation.

As for other universities, in 2011 the Clinton Global Initiative University was hosted at UC San Diego – a publicly funded campus. A public records act request on the cost of the event is before campus officials, who have told The College Fix they will respond in late July.

When asked by The College Fix if ASU was aware of the fact that several universities got the program for free, an ASU spokesman released the following statement:

“ASU played host to the Clinton Global Initiative University in March 2014, which featured former President Bill Clinton and former Secretary of State Hillary Clinton in a program aimed at bringing together college students to find practical, innovative solutions to global challenges. The report you cited reflects the fact that the university co-invested in this educational and promotional opportunity, which was co-produced for our students, and for students from around the world. No public funds were used for this purpose.”

And the president of ASU, Michael Crow, has responded to criticism over the cost in a lengthy statement in which he argued hosting the Clinton Global Initiative was no different than hosting the March Madness Final Four college basketball tournament.

He also targeted political partisanship, accusing journalists of attacking the decision to spend the money as politically motivated.

He said criticism “hung on names that journalists know serve as a dog whistle for politically-driven sound bites, fail to recognize that the university is about outcomes, about creating master learners immersed in a diversity of thought and prepared for any career path. They fail to acknowledge what the university is and how it operates to acquire what it needs to be successful.”

The College Fix reached out to the Clinton Global Initiative for comment, but no response was given.