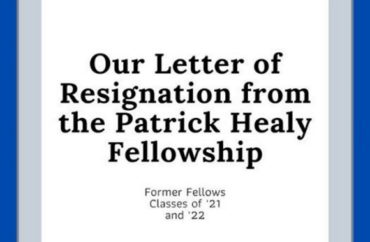 The Patrick Healy Fellowship program is a highly selective leadership community for Georgetown undergraduates that focuses on “addressing issues that affect communities of color,” according to its website.

Housed in Georgetown’s Center for Multicultural Equity & Access, the program was founded in 1997 and has long been at the forefront of campus activist causes.

Early last month, however, current members of the program resigned en masse, claiming its leadership, despite being former fellows themselves, exhibited racism, among other offenses.

The program boasts a challenging GPA requirement to apply due to the immense resources it provides to students, like alumni mentorship, interview practice, and leadership trips.

Georgetown Junior Rimpal Bajwa, one of the members who resigned, told The Hoya campus newspaper that this requirement prioritizes academics over activism and is classist and elitist.

Former fellows also complained of racism in the form of one white board member, an alumnus of the program, describing one black applicant as “aggressive” after her interview for the program.

Bajwa told the school paper that “Hearing that language of an angry Black woman, that’s such a stereotype, and it’s such a trope that’s been used to mitigate the voices of Black women…It was definitely a very racist and sexist thing to say to a Black woman.”

Yesterday we, former Georgetown Patrick Healy Fellows, posted a public resignation from the fellowship and acknowledgment of all of the harm perpetrated by the Board and some Alumni on Instagram. Today they have logged into the IG account and deleted these posts. pic.twitter.com/ux9kfLwb2w

One of the requests of the resigning members, spelled out in a statement published Nov. 2, is the forced resignation of an unnamed board member who “has shared racist and/or classist comments.”

Another request also calls for the removal of the minimum GPA requirement.

The last of the resigning fellows’ central grievances is an ambiguous allegation of sexual assault. They seek “removal of certain fellows given allegations of sexual assault and lack of contribution to the fellowship,” according to their statement.

These three main complaints created a culture of “repeated instances of racism, queerphobia, sexism, classism, etc,” as the former fellows described in their resignation letter.

According to Briana Thomas, a fellow who resigned over the summer, the current members of the fellowship want the program to be more than a networking opportunity, she told The Hoya.

“Everyone who came before us never really advocated for a change at the level we are currently doing because the fellowship breeds that professional networking and contacts are more important than moral integrity and actually supporting the voices of students of color,” she said.

As for the alumni leadership of the program, it appears they are willing to call the resigning members’ bluff.

“[W]e are willing to accept your voluntary resignation from the Fellowship,” they stated in a letter to complaining members, adding they will look into the grievances but saying the way they approached things was unprofessional and unsubstantiated.

About the Author
Dalton Nunamaker
College Fix contributor Dalton Nunamaker is a student at Georgetown University majoring in government and psychology. He is on the executive board of the Georgetown College Republicans, and Campus Outreach Christian ministry. He is also a co-host of the Fly on the Wall podcast at the Georgetown Institute of Politics and Public Service. Dalton worked on Senator Josh Hawley's (R-MO) campaign and then as a military policy intern in the Senate.