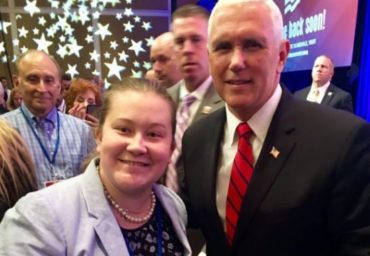 I trace my conservative roots to my grandfather, Arthur Delliveneri. He was a World War II veteran who served under General George Patton and someone who loved this country and defended it with valor.

When he returned home after his deployment, he ran several small businesses over the next 30 years. He was the kind of man a dad would want his daughter to marry. His morals and faith informed his political beliefs. His values are common in the conservative movement: a love for country, small government and the nuclear family. There was no better representation of a strong family man and the American Dream.

My grandfather died when I was three years old, but the many stories my parents and other family members have told me about him has left a profound impact on my life and belief system. He was a man who loved Ronald Reagan and capitalism, and today, so do I.

So much so, in fact, that despite my initial desire to become a Veterans Affairs doctor, I switched my major at Emmanuel College to Political Science after realizing the stranglehold liberalism has on higher education and so many of my peers. It is so strong that the very ideals my grandfather fought for and cherished are at risk. I have committed my life to safeguarding them, starting with my campus. I want my children to grow up in a society organized around the same ideals for which my grandfather fought. 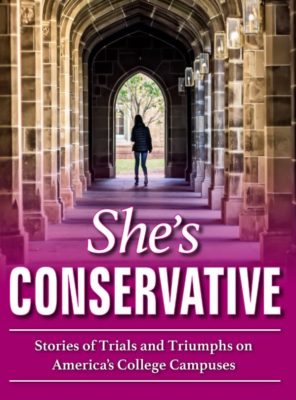 I led an effort to launch a Network of enlightened Women chapter on campus in the fall of 2017. It was my first major battle. The student government at Emmanuel College — a private, Catholic institution in Boston — initially blocked its formation as a recognized club. Student government members said the conservative policy stances we support “projected divisive subject matter.” But my friends and I would not take no for an answer. We fought for our First Amendment rights, and eventually our club was recognized.

My next battle consisted of generating constructive dialogue on campus. We would invite right-of-center speakers to campus to debate and give viewpoint diversity a chance to thrive, yet at every turn our efforts were thwarted. Professors tweeted messages encouraging students not to attend our events. Posters advertising our talks were defaced. Some student government members called us names like “garbage” on social media.

But we all face challenges in life. My grandfather did not cower before adversity, even in the freezing cold trenches during the Battle of the Bulge, and neither will I. These attacks on conservative principles have only strengthened my resolve. I know I speak for the other ladies in our club as well when I say the struggles we have faced have made us all stronger in our beliefs and more resolute in our desire to continue our free speech and viewpoint diversity campaigns in the years to come.

Meanwhile, my experiences inside the classroom also have included strife. As a Political Science major, I am often the only conservative in class and am forced to defend my views to peers and professors alike. They like to single me out and pick on me. It is okay. I can take it. And I have grown to like the challenge.

But the actions of one professor in particular stand out as especially grievous. He did nothing when a student called me a “racist bigot” in class a day after the 2016 presidential election because I had voted for Donald Trump. He also frequently compared the “Make America Great Again” slogan to ones Adolf Hitler used. Fed up, I visited him during office hours and tried to discuss how that is a false and offensive comparison. He raised his voice and declared I could not question what he said in class.

While these anecdotes may seem horrifying, they have actually enlightened me on how empowered I am as a conservative woman. The opposition I face has forced me to be resolute in my beliefs, studying policy issues from every angle so I am prepared to defend them. I will continue to challenge the status quo on campus to work to ensure all political ideologies are represented.

I feel like I am fighting my own American Revolution right here at my Boston campus, and I am proud and excited to continue to defend everything I was raised to cherish.

Mia Steupert is a senior at Emmanuel College studying Political Science. She founded the Network of enlightened Women chapter on campus.

This essay is one of 22 essays included in “She’s Conservative: Stories of Trials and Triumphs on America’s College Campuses,” published by the Network of enlightened Women. The new book is available for purchase here.