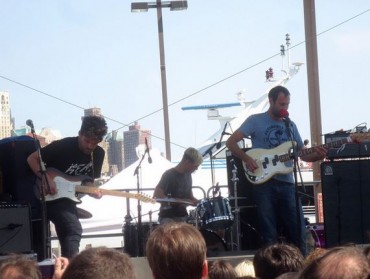 So I stumbled across this headline on Twitter on Tuesday: “Viet Cong Show Canceled Due to ‘Offensive’ Band Name.”

Pitchfork reports that an Oberlin College promoter has publicly flogged himself for hiring a band with a name some found offensive for The Dionysus Disco, a student-run nightclub on campus.

The venue vows to bring “the highest quality musical acts to campus as well as showcasing the musical talents of Oberlin students.” But for one band that got a gig there – Canadian indie rock band Viet Cong – it doesn’t matter if they’re good or not, apparently.

“I acknowledge the problematic nature of a band naming themselves ‘Viet Cong’ and extend my apology to anyone hurt or made uncomfortable by the name and its connotations,” the guy who hired the band said in an excessively long letter of apology. It went on:

“[A band member explained that name] comes from our drummer, and from us being teenagers and watching movies. The Viet Cong were always the bad asses in movies.” The fact that the band openly acknowledges their problematic name, yet fails to change it or do anything about it, highlights this blatantly appropriative move, reinforcing a tradition of American (and Western) orientalism and appropriation.

What the Vietnamese student community helped me understand is that I cannot claim to fully comprehend the implications of a band (consisting of four white Canadian men) naming themselves “Viet Cong.” I can call out this name for being grossly ignorant and deeply offensive, but I also understand that even if I knew all the historical context, I am not someone whose personal and historical history is directly tied to and affected by the consequences of U.S. imperialist actions in Southeast Asia. This is precisely why I believe it is important for me to listen to the concerns raised by those who do understand and are affected on a deep emotional level. I cannot with good conscience put on this show knowing that it hurts others, and the onus should absolutely not be on those who are hurt to educate the rest of the community on why this name is offensive.

If I am reading this correctly, he is not upset because the name “Viet Cong” might be offensive to the relatives of American servicemen who died fighting the communist Viet Cong, he is upset because the band is culturally appropriating the guys who killed our guys.

You would think the folks at Oberlin would like a band named after commies. It is one of the most liberal colleges in the nation, hands down.

Don’t believe me? Ask the students themselves. I stumbled on this gem of an op-ed in the campus newspaper. Headlined “Fervent Progressivism Blocks Other Views,” student Chloe Vassot says in her Feb. 20 piece that she grew up in a conservative region and came to Oberlin for its liberal and open-minded reputation.

But get this – it’s so liberal that it’s oppressively so, and she said she is sick of being spoonfed her own ideology. Some students are even thinking of transferring to another school it’s so bad:

As a self-professed liberal-minded first-year, I love the mainstream Oberlin culture and the continual validation of my own opinions and beliefs. But other first-years who have more moderate or less fervently progressive views can feel that their ideas are excluded and dismissed.

This is one of a few reasons some are choosing to transfer to another school or strongly considering that possibility for the coming year. It is sadly ironic that a community that professes to value freedom of thought and expression can concurrently shut out moderate (and especially conservative) thoughts and ways of thinking.

To take an extreme example, the general perception on campus of people who are anti-abortion is that they are ignorant, misogynistic and do not respect the fundamental rights of women. Since being at Oberlin, the intense rhetoric and mindset against people with such conservative views has begun to strike me as too simplistic and naïve, and very unfair toward people who actually hold these views.

Keep in mind, Oberlin is the college that:

Advised professors to avoid triggering topics such as racism, colonialism and sexism