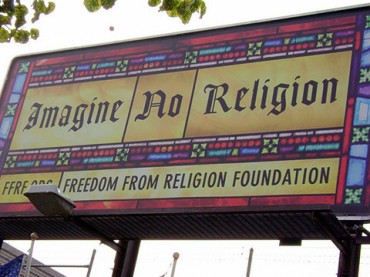 Anti-religion groups are pressuring Georgia Southern University to crack down on a history professor who they claim is pushing Christianity onto his students, though a national anti-Darwinism group is accusing those groups of hypocrisy.

Tom McMullen’s specialty is the history of science, and his courses include “Science and Religion” and “Dinosaurs and Extinction.” One of his books is subtitled Cosmos by Chance or Universe by Design?

In an Oct. 22 letter to university President Brooks Keel, the Richard Dawkins Foundation for Reason and Science and the Freedom From Religion Foundation said that “it is our information that McMullen uses class time to proselytize students and advance his personal religion, Christianity.”

Though McMullen could “legitimately discuss religious doctrines masquerading as science … it appears that McMullen does not present these as religious ideas lacking scientific merit,” therefore violating the Establishment Clause, the letter said.

The dispute spilled into public shortly before Thanksgiving with a report by the Statesboro Herald.

The Freedom From Religion Foundation became aware of McMullen’s teaching because of a student complaint that was confirmed by other students and backed by online research, staff attorney Andrew Seidel told the Herald. Several student reviews at RateMyProfessors say that McMullen offers extra credit, some of it concerning religious belief. One post from May 2013 says “most of [the extra credit material] is trying to convert you” to the professor’s Christianity.

The letter to Keel said McMullen offered extra credit for students to watch the movie God’s Not Dead, which it called “an argument for converting to Christianity and loathing atheists in movie form.”

As The College Fix previously reported, God’s Not Dead “was inspired by a true story of religious persecution against a Missouri State University student” who was punished by the school for refusing to lobby the Legislature in favor of gay adoption.

The letter cites Coyne as saying that “virtually everything McMullen says about evolution is dead wrong. He’s teaching lies to students and pushing a religious viewpoint.”

Former agnostic who ‘realized science didn’t have all the answers’

McMullen declined to talk to The College Fix about the God’s Not Dead assignment or other course work, citing “legal advice not to grant any more interviews.”

In an interview with the Herald, McMullen said students could get extra credit for writing about a God’s Not Dead scene in which a professor and student debate God’s existence. McMullen offered two classes this option and said about half of the students took him up on it, while none took him up on an alternative extra credit opportunity.

“In some of my classes, like for instance, World History I, we’re doing Jainism, Buddhism, Hinduism, Judaism and then Christianity, and then later Islam, and also, I might add Zoroastrianism, Manichaeism,” McMullen told the Herald. “I don’t try to convert anybody.”

McMullen said he does not believe in evolution in the context of species evolving from one point.

“I was agnostic, thought science had the answers, and investigating science, I realized science didn’t have all the answers, including descent from a common ancestor, and then came to believe in God,” McMullen said.

The professor said he doesn’t grade students who disagree with him more harshly, adding that “the whole thing about academia is, you know, that there’s a freedom of thought to examine different issues … I don’t preach creationism.”

McMullen told the Herald that university officials have his evaluations and syllabi going back “perhaps” five years, as well as tests and extra-credit offerings for the past two years.

Associate Vice President of Legal Affairs Maura Copeland wrote back to the foundations Oct. 30 saying that the university is “well aware of its great responsibility to abide by all provisions of the Constitution of the United States of America,” according to the Herald.

An intelligent-design group that has defended professors under fire for questioning evolutionary science declined to explicitly back McMullen, instead focusing on his critics.

In a post for the Discovery Institute’s Evolution News and Views blog, Vice President John West said the “campaign against Professor McMullen reeks of hypocrisy.”

The Freedom From Religion Foundation “expresses outrage because it seems to believe that critiquing Darwinian theory is an implicit method of preaching religion,” but is silent “when atheist professors explicitly misuse science to promote atheism in the classroom,” West wrote.

West noted that an evolutionary biologist at the University of Washington, David Barash, penned a column for the New York Times in September explaining that every fall he gives his students “The Talk” – an extended attack on religious belief.

“The more of we know of evolution, the more unavoidable is the conclusion that living things, including human beings, are produced by a natural, totally amoral process, with no indication of a benevolent, controlling creator,” Barash wrote that he tells students.

“In other words, Barash actually boasts of pushing atheism in the classroom in the name of science,” West wrote. “I have yet to see any letters or press releases from FFRF demanding an investigation of Barash.”