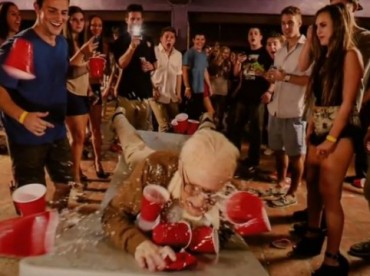 TUSCON – The story by actor Johnny Knoxville that he was slipped ecstasy at a recent University of Arizona frat party prompted a fraternity official to deny the claim and campus officials to probe what occurred at the now infamous party.

The “Jackass Presents: Bad Grandpa” headliner filmed a promotional video at the University of Arizona Sigma Alpha Epsilon house in September when the incident allegedly occurred.

“I was at a frat house and I was sitting with the students watching the screening and, lo and behold, one of them slipped me a dose of ecstasy in my beer,” Knoxville told Jimmy Fallon during a recent guest appearance. “I swear. … My heart started racing, I was like – ‘What is this. Oh, I remember.’ ”

The mayhem that ensued that night included Knoxville doing a table dive, keg stand and basketball dunking stunt that severely injured his finger, according to pictures of the event.

Complicating matters, the fraternity was given permission to hold the Sept. 6 party under the condition it would be alcohol-free, a campus official told the Arizona Daily Star. However, dozens of pictures from the evening prove that part of the bargain was not upheld.

In interviews, Knoxville has never named the fraternity house, nor has he sought to press criminal charges, but the University of Arizona community is well aware of where the party took place.

In a statement to The College Fix, campus officials said that since the actor has not pressed the matter, neither will they.

“If a report was made to the Dean of Students Office this is an allegation that would be taken very seriously, but at this time no report of this nature has been made to campus officials,” Johanne Ives, assistant dean of students, said in an email.

As for the booze at the party, that’s a different matter. University officials investigated the case and it was heard by the Greek Standards Board.

According to Ives, the chapter was found responsible for hosting an event with alcohol and was given several sanctions, including that “third party’s will no longer be welcomed on site without a 14 day advance written release form to prevent ‘being taken advantage of’ again. In addition, SAE shall not portray the U of A … nor the chapter in a ‘negative light’ with the media.”

Reaction among students to the whole affair has been mixed. Some say they think that partying with Knoxville was a great time, while others believe the actions of the fraternity are disappointing and have embarrassed the campus.

Meanwhile, an SAE fraternity official has denied the actor was dosed.

“It is all a made-up hoax and a publicity stunt on his part!” TJ Howe, the chapter’s adviser, said in an email to the Arizona Daily Star.

Ives stated that should a future complaint be filed regarding the drug use, the disciplinary action taken may be as a result of an individual’s behavior, not necessarily the actions of the fraternity.

“It is hard to answer who might face sanctions as this type of allegation could result in an individual student code of conduction violation rather than an organization,” Ives said.