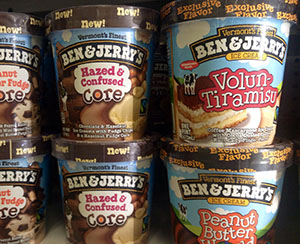 Let me state my conflicts of interest up front: I love puns. And I’m mad at Ben & Jerry’s for repeatedly discontinuing my favorite flavors over the years (“From Russia With Buzz,” “Urban Jungle,” and so on).

So the news that the quasi-socialist ice cream maker might change the name of its “Hazed & Confused” flavor at its October leadership meeting – because “hazed” sounds like “hazing” – struck a nerve. A spokesman told Bloomberg the name is

a play on hazelnuts and the phrase “dazed and confused,” made famous by a Led Zeppelin song and 1993 coming-of-age comedy [Richard Linklater’s Dazed and Confused].

Ben & Jerry’s released the ice cream flavor in February and didn’t receive a complaint until more than six months later. Lianne and Brian Kowiak of Tampa, Florida, whose 19-year-old son died in a hazing incident in 2008, noticed an ad for the ice cream and sent an e-mail to Ben & Jerry’s on Sept. 5.

“I just paused and I was shocked and we were dismayed,” said Lianne Kowiak, who speaks to students and families about the dangers of hazing. “I was just upset about it.”

You might expect the company received a groundswell of similar protests over this insensitive name, which thumbs its nose at the humorless, pun-hating ice cream industry. Nope:

Even the anti-hazing community thinks this renaming is a dumb cause. But that hasn’t stopped the embarrassingly apologetic Ben & Jerry’s from digging itself into a deeper hole of self-righteous flagellation:

While Ben & Jerry’s meant no harm with the Hazed name, it may not have been attuned enough to the issue, said Greenwood, who compared the company’s tone-deafness to institutional racism. What’s next? Are meteorologists going to flip through the thesaurus before going on air to find a suitable synonym for “haze”? Who knew the five-day forecast could be a triggering event?

This act of corporate cowardice – even discussing this at a leadership meeting – in response to a non-scandal goes to the core of what’s plaguing higher education today, and filtering down to the rest of society: the endless fear of, and overcompensation in response to, being labeled insensitive.

Professors are red-lining their lesson plans out of fear that they might “trigger” a student by exposing them to themes in classic literature, and – if they aren’t tenured – get axed for their insensitivity. Colleges are caving to immature, narrow-minded students who demand that speakers they disagree with be “disinvited” from giving commencement speeches, as documented in the new book Freedom From Speech.

The Internet mob seizes on every slightly off-color, context-crucial utterance by even its putative allies: Remember Stephen Colbert (who also has his own Ben & Jerry’s flavor, “AmeriCone Dream“) provoking another pathetically small protest for his satirical pledge to found “The Ching-Chong Ding-Dong Foundation for Sensitivity to Orientals or Whatever”?

Ben & Jerry’s exercise in liberal guilt is even more appalling because it wasn’t trying to engage in social commentary. It doesn’t have the excuse that “hazed” sounds like a racial slur, either.

When corporations cave like this, it emboldens other fringe groups to make laughable demands based on their poor command of English. It encourages other companies to avoid creativity or humor. Taken to its logical extreme, it gives us the pain-free and terrifying society in The Giver (or Canada).

Losing a child to hazing is a tragedy, and one that colleges are finally paying more attention to. But taking offense at an innumerable universe of word combinations and contextual meanings, and demanding that such offense be institutionalized, serves to create a society that can address hard issues only at the margins.

Here’s a compromise for Ben & Jerry’s that’s fully in keeping with its past practice: Just discontinue hazelnut ice cream entirely. Teach the high priests of sensitivity that there are real consequences to their ignorant campaigns for chilling effects.

Or just blame the high global price of hazelnuts.