The president of the Berklee College of Music took to Facebook on Tuesday night to apologize after the school allowed Boston City Police to use restrooms on the campus after a protest against police violence concluded on Sunday.

According to the apology, a number of officers posted at the intersection of Massachusetts Avenue and Boylston Street were let in by the Berklee Public Safety staff to use bathrooms in the nearby Berklee Performance Center.

“The decision to allow them into our facilities was ours,” said the letter, which was signed by school President Roger H. Brown, Senior Vice President for Administration and Finance Mac Hisey, and Senior Director of Public Safety/Chief of Police David Ransom.

“This was not a formal decision by the institution, but an informal one, made on the spot. Some have asked if the campus was used to house or stage activity of the Boston Police; it was not,” said the letter.

“We have heard from many of you personally and across social channels of your hurt and anger that this access was permitted, especially as the facility is not currently open for students and members of our community. Allowing police officers into the space was in no way meant to undermine Berklee’s support for Black Lives Matter.

We understand that many members of our community feel betrayed. We are deeply sorry for the impact this had on our community and for perpetuating feelings of oppression, silencing, and marginalization. We will make a more concerted effort to consider the effects of our actions.”

Brown, Hisey, and Ransom finish by saying it “should not have happened,” promising that “it will not happen again.”

This isn’t the first time a university has objected to public safety officers using its lavatories. In 2017, the University of California-Berkeley requested that security guards posted on campus for a speech by provocateur Milo Yiannopoulos not use the public restrooms, as “it was upsetting some students.” 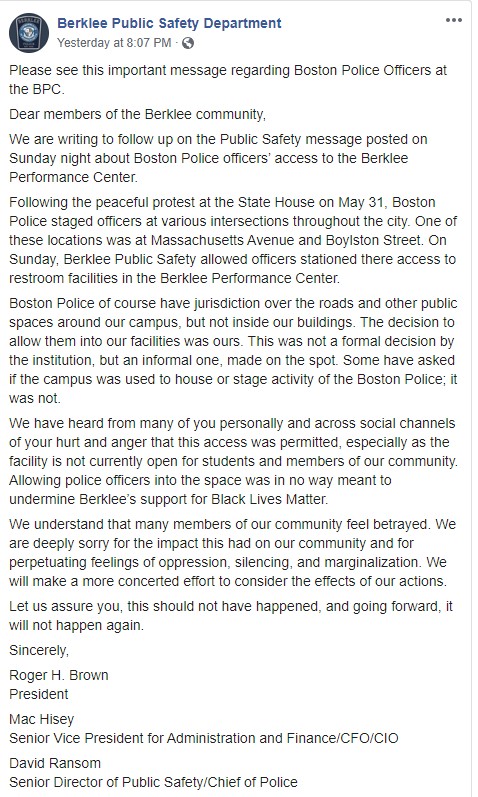