In a University of Oregon classroom in October of 2018, a professor was finishing his lecture when he made a rhetorical aside. The professor was discussing a PowerPoint slide that referenced “Potiphar’s Wife,” a Biblical story in which a married woman makes an offer to have sex with one of her husband’s slaves, Joseph, only to have him turn her down. To punish him, Potiphar’s wife then accuses Joseph of rape.

“This is an issue in our society,” the professor allegedly said. “Now that you all know what this phrase means, you can go use it to describe the Kavanaugh trial,” he is recounted as saying.

The class occurred at the same time U.S. Supreme Court nominee Brett Kavanaugh was facing allegations from psychology professor Christine Blasey Ford that he had assaulted her as a teenager. While no determination was ever made as to the veracity of Blasey Ford’s claims, Kavanaugh was eventually confirmed to the court.

But one of the students in the class was outraged enough to file a complaint with the university against the professor. Using the school’s “Bias Education and Response Team” reporting process, the female student reported she was “deeply offended by this professor’s false, ignorant, biased commentary that outwardly projected his political opinions (defending Supreme Court nominee Brett Kavanaugh) and completely discredited sexual assault survivors like myself and Dr. Christine Blasey Ford, among countless other women.”

“Many students sitting near me were visibly conflicted” by the professor’s statement, wrote the student, “which blatantly insinuated that cases of accused rape and/or sexual assault are really just instances of vengeful women lying about innocent men who denied interest in them.”

This incident is one of nine filed with the University of Oregon’s bias response team during the fall of 2018, obtained through an open records request by The College Fix. Names were redacted from the files received.

The others included a trans student upset someone put a Trump sticker on their car, two white male students who felt they were discriminated against because of their skin color and gender, and a Jewish student whose Star of David was vandalized.

According to documents produced by the university urging students to file reports, “bias” is defined “as anything that is said or done that you find discriminatory or offensive.” The university’s report adds bias “is not always intentional” and “does not always violate the student conduct code, state law or affirmative action policies.”

In past years, students have gladly accepted the administration’s challenge to file reports. In the 2013-14 academic year, 51 incidents of bias and/or discrimination were filed with BERT. The next year, that number increased to 85 incidents. Requests by The Fix for information on subsequent years went unanswered by university staff.

The reports that have been publicly made available are a stunning look at the extent to which students are willing to report one another, for even the smallest of transgressions.

The detailed reports obtained by The Fix for the fall of 2018 show a similar desire by students to report one another for perceived slights.

According to one incident report, a lesbian student was in her dorm room with her bisexual girlfriend one October night, watching videos and studying, and heard someone yell “Shut the fuck up, you fucking faggot” in the hallway. The student opened the door, looked out, and didn’t see anyone in the hallway, but said she was “80% sure” the slur came from the room next door to hers. She knocked on the door three times and no one answered.

“I don’t necessarily believe the slur was directed at me, but it still stressed me out to hear it used so loudly and freely,” the student reported. Nonetheless, she reported the name of the student living next to her to the university, based on suspicion alone.

Another report was filed by a student offended by messages posted on a wall on the fifth floor of the Barnhart Hall dorm, an area which students affectionately began calling “The Cove.” The posted pieces of paper, which include rap lyrics and other off-color messages typical of young college students, offer “Quotes of the Day,” like:

“We out of Kleenex, what we gonna do? I can’t even jerk off now.” 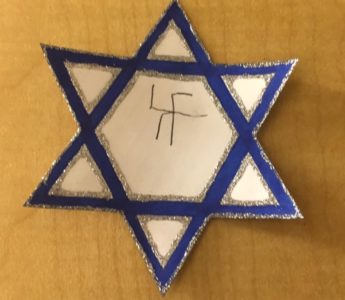 In November, a dorm resident posted a Star of David on her door (pictured), only to find it defaced with a poorly drawn swastika. The student seemed to take the incident in stride; when asked if she felt safe in her room, she said yes, but did feel “sort of weird.” Nonetheless, when the student’s step-father found out about the incident, he began calling faculty around campus and demanding action. The dorm’s resident advisor asked the student and another student who had posted a Star of David as a sign of solidarity, and both students said they were “fine,” but “slightly upset.”

On November 21 outside Villard Hall, a student reported that a supporter of President Donald Trump had defaced their car by placing a Trump sticker over a “trans flag” sticker. The student reported this “vandalism” had “made me feel unsafe,” believing it was a response to recent news affecting transgender individuals.

“It seems pointed after the federal government memo leaked about changing the policy from gender identity recognition to one of trans discrimination,” the student reported. “I just want to let someone know in case their [sic] are other cases of this type of vandilizm [sic].” The University of Oregon Police Department did not respond to e-mails regarding this incident.

In two of the reported incidents, students reported bias against white males. In one instance, a male took exception to a speaker at a mandatory fraternity meeting who was there to speak against racism and sexism.

“The guest speaker referred to white people as ‘whities’ which is extremely racist,” the student reported, “and I feel that although I may be a privileged white male I do feel like his speech was very racist against white people.”

“Putting down one race to make another look better is a text book definition of racism, and I will not support it on my campus,” the student added.

In December, another student took objection to a poster hanging in Lawrence Hall that welcomed students to campus. According to the report, the poster says a number of people are welcome – “women are welcome, blacks are welcome, latinos are welcome, etc.”

The student complains that “every possible group” is explicitly welcomed “except for men and white people.”

“Ifeel [sic] personally insulted that an official college services facility would put up a poster that says everyone is welcome here except for men and white people,” the student says. “There is no reason to exclude men and its discrimination at its most hypocritical.”

In October, the coordinator of the Multicultural Education, Engagement, and Student Success with the Dean of Students’ office filed a report on behalf of a student that sought special accommodations for her classwork. During the second week of class, the student missed an assignment, but told the professor that the Accessible Education Center had granted her flexible deadlines as one of her accommodations.

According to the university, those reported to the bias team do not get in trouble.

“The BERT does not and will not initiate disciplinary action or impose sanctions regarding bias incidents. Data collected from the bias reports is used to develop educational and outreach programs,” its website states.

MORE: Recent bias complaints filed at U. Florida cite a grumpy professor, a racist Snapchat, and a crass joke