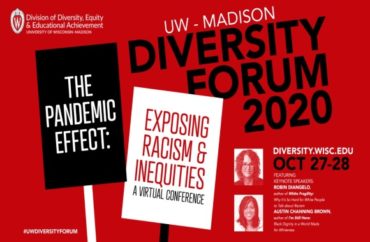 Black leaders at the University of Wisconsin-Madison are staying silent on a recent issue brought to light that a white guest speaker was paid much more than a black guest speaker for their appearances at a recent diversity, equity and inclusion event hosted by the school.

The university paid “White Fragility” author Robin DiAngelo $12,750 to speak at the diversity event earlier this fall, while its black speaker, Austin Channing Brown, received $7,500 for speaking at the same event, according to an article published by The Washington Free Beacon.

That’s 70 percent more, a difference of $5,250. While Brown’s address did run a half-hour shorter than DiAngelo’s, both were billed as keynote speakers by the university.

The authors gave speeches on whiteness and diversity as part of the University of Wisconsin’s 2020 Diversity Forum, an event that is the school’s “premier all-campus and community platform to discuss, share and learn about contemporary issues on diversity and inclusion,” according to its website.

Asked about the pay disparity, Ethelene Whitmire, professor and chair of the University of Wisconsin-Madison’s Department of Afro-American Studies, sidestepped the issue.

“The department has not discussed this topic,” Whitmire stated via email to The College Fix.

A representative from Black Cultural and Multicultural Student centers was just as mum, only stating: “We are unable to fulfill media requests at this time.”

Both books reached bestseller status in June, a result of the widespread protest and demands for racial equality surrounding the death of George Floyd while in police custody.

Each of the two speeches were livestreamed virtually via Zoom, and attracted more than 3,300 viewers, according to a campus spokesperson.

Brown did not respond to a request for comment from The College Fix, nor did the school’s chief diversity officer.

The Beacon reports that presentations’ prices were negotiated between the university and the Harry Walker agency, a speakers bureau which represents both Brown and DiAngelo.

In an email correspondence with The College Fix, University of Wisconsin spokesperson Meredith McGlone refuted this assertion, stating that the speakers’ presentation fees were at a set price and did not undergo negotiations.

“The article you reference incorrectly states that these speaker fees were negotiated by the university – that’s not correct. Fees are set by the agency that represents the speaker,” she said.

McGlone declined comment on questions as to what made DiAngelo’s speech worth more than Brown’s.

Racial pay disparities is a subject addressed by DiAngelo’s “White Fragility” and is a major effect of racist capitalism, according to the book.

“[C]apitalism is dependent on inequality … If the model is profit over everything else, you’re not going to look at your policies to see what is most racially equitable,” reads an excerpt from “White Fragility.”